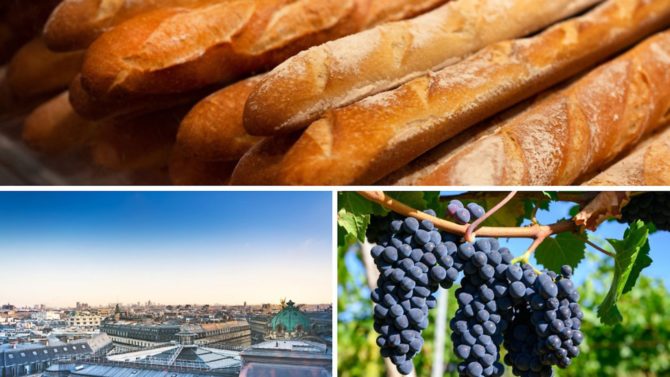 The traditional baguette, the rooftops of Paris and Jura’s Fête du Biou d’Arbois wine festival are all hoping for a place on the UNESCO Intangible Heritage list – which one will be successful?

The traditional baguette, the rooftops of Paris and a wine festival in Jura are the French candidates currently vying for nomination to be included on the UNESCO Intangible Heritage list. Minister of Culture Roselyne Bachelot has until mid-March to decide which of the three applicants she will present to President Macron as the 2021 candidate to put forward to UNESCO.

French bakers are seeking recognition for the traditional baguette in order to protect the savoir-faire that has been passed down through the generations. “It would be a good thing to protect our baguettes, our know-how,” says artisan baker Jean-Yves Bouiller. “It would recognise the baguette as a unique product that is typically French and something other countries can’t make.” France’s iconic bread was given government protection in 1993 with the Décret Pain, a law which stipulates that traditional baguettes can only be made with four ingredients (water, flour, salt and yeast) and must be made on the premises where they are sold. Baguettes are an intrinsic part of daily life in France and around 6 million of them are sold each day. The UNESCO listing already covers ancient methods of making flat breads in Iran and Khazakhstan.

There have been calls to protect the iconic zinc rooftops of Paris since 2015, and they were runners up in the battle for UNESCO recognition last year. However, city mayor Anne Hidalgo has thus far failed to lend her support to the campaign. Known for her green policies and plans to make Paris Europe’s greenest city by 2030, which include the revegetation of the city’s rooftops with gardens and allotments, she has previously said that “such a classification would hurt efforts to renovate ecologically”.

The Fête du Biou d’Arbois wine festival has been celebrated in Jura since medieval times and takes place each year on the first Sunday in September. The biou is a gigantic ‘bunch’ of grapes which is put together by local vignerons using perfect bunches of white and black grapes that are almost ready to harvest, and then decorated with flowers. A procession sees the biou carried through the town to the church where it is blessed and hung above the altar as thanks to God for the harvest to come.

The Intangible Heritage list was created in 2008 to recognise practices and skills of exceptional importance. To compete, France’s candidates must be registered with the inventory of national heritage, and must then be deemed suitable for presentation to UNESCO, but ultimately the decision rests with Minister of Culture Roselyne Bachelot.

Other aspects of France’s culture which have previously received UNESCO recognition include French gastronomy, the perfume-making industry of Grasse and the Fest-Noz in Brittany.

Make your own French baguettes with this recipe

What is the Beaujolais Run?