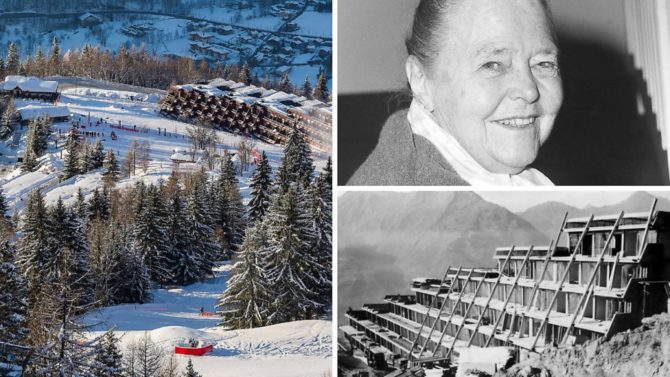 Charlotte Perriand is hailed as a leading figure of 20th-century design and a new exhibition will pay tribute to her visionary spirit and talent. Charlotte Perriand: the Modern Life, will run from 19 June to 5 September 2021 at the London Design Museum.

Born in Paris in 1903, Charlotte Perriand demonstrated her tenacity and determination to succeed in her chosen career in design and architecture – and in what was a man’s world – at an early age. In 1927, she went to renowned architect Le Corbusier’s offices and told him that she wanted to work with him. He told her he wasn’t interested but within a year realised the mistake he had made and offered her a job. She went on to collaborate with him on the conception of the landmark Cité Radieuse in Marseille, and her impressive CV included projects such as the design of a chaise longue for the masses, and rethinking hospital design and university accommodation.

At the age of 65 she began working with Roger Godino, the developer, and Robert Blanc, a mountain guide in the area, to create the French Alpine resort of Les Arcs, located in the Tarentaise Valley in Savoie. It was the most ambitious project of her life and she dedicated the last 20 years of her career to the development of Les Arcs. Respect for nature and the importance of bringing people into contact with their natural environment were fundamental to her vision for the resort, which would ensure that apartment complexes were integrated into their surroundings, that existing mountain chalets would be conserved and that local materials would be used.

In line with her Humanist principles, Perriand also designed the interior spaces of the Arc 1600 and Arc 1800 apartments with functionality in mind from the point of view of the user, and was responsible for pioneering new concepts including integrated kitchens that opened onto the living space – a revolution at that time – and raised balconies that allowed more light to enter each apartment and wider views of the mountains. She also conceived and designed each piece of furniture.

In 2006, Les Arcs was awarded the ‘Remarkable Contemporary Architecture’ label by the French Ministry of Culture. The resort itself is a life-sized exhibition of Perriand’s work and architecture tours organised by local guides can be booked at the Les Arcs tourist office.

Artist Russell Boncey: living in Fontainebleau and exhibiting in Burgundy

Previous Article Property dreams: 5 stunning homes for sale in France
Next Article Do I need two wills to cover my French property?