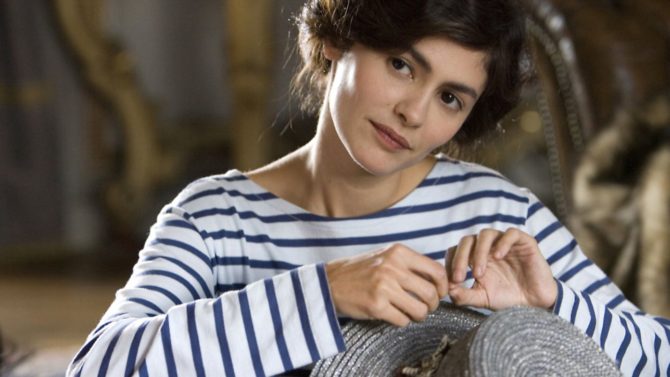 Known in France as la marinière, the Breton striped top is a wardrobe staple favoured by everyone from Coco Chanel to Pablo Picasso. Find out how the Breton shirt went from being a sailor’s uniform to a cult classic

Like gooey camembert and berets worn at a cheeky slant, the nautical striped shirt, known to the French as la marinière, is a cult classic that should be found in the wardrobe of every Francophile.

Where it all began…

Brittany is famed for its maritime heritage, so it is hardly surprising that it was the region’s inhabitants who invented the navy and white striped shirt. Local sailing greats Olivier de Kersauson and Eric Tabarly were among those who wore the garment with pride.

Knitted from thick wool to protect fishermen from the wind and weather, the striped Breton shirt became the official uniform of the French Navy in 1858. It was thought that the characteristic bands of colour would make it easier to spot a sailor who had fallen overboard. According to legend, the 21 stripes represented the number of Napoléon Bonaparte’s victories over the British. Even today, the original combed cotton sweaters are made to strict specifications: white stripes should be 20 millimetres wide and blue stripes 10 millimetres, with 14 or 15 stripes of each colour on the sleeves.

The jaunty jumper (or tricot) did not hit the fashion headlines until 1917. With World War I still raging, celebrated designer Coco Chanel, who had a boutique in Deauville on the Normandy coast, was inspired by the sailors’ uniforms to create a nautical collection that included Breton striped shirts. Not only did her creations cause a storm in the fashion world, they also helped to launch a sexual revolution, as French women tore off the then-fashionable heavy corsets and began to adopt the casual striped marinières.

By the 1950s, the Breton striped jumper was being seen everywhere: New Wave director Jean-Luc Godard dressed heroines Brigitte Bardot and Jean Seberg in the cult pullovers; artist Pablo Picasso chose to paint in one; and mime artist Marcel Marceau wore them during performances. Adopted by intellectuals and artists, French marinière fever spread to Hollywood and celluloid greats ranging from Audrey Hepburn to James Dean were seen in the blue-and-white stripes.

The fashion inspired leading designers including Yves Saint Laurent and Karl Lagerfeld, while Jean-Paul Gaultier has featured Breton striped shirts in his collections since the 1980s. In 2010, fashion house Prada added the French icon to its summer collection, and last year MoMA in New York featured the garment in an exhibition entitled ‘Is Fashion Modern?’

A French icon: the beret

Where can you buy a Breton top?

Many manufacturers have produced the garment, but Saint James, based in the eponymous village near Mont Saint-Michel, can lay claim to being the most authentic, as it has been making the striped shirts since the 1880s. The company was awarded EPV (Entreprise du Patrimoine Vivant) status in 2013 and still supplies its banded sweaters to the French navy.

The Breton striped jumper is a staple of many wardrobes and is stocked in stores on both sides of the Channel. Rachel Walker, director of the UK-based Original Breton Shirt Company, said: “It remains popular because of its timeless style. It’s a classic fashion piece, easy wearing and appeals to all ages, so you just can’t go wrong with it.”

Only 10 people (all women) possess the raccoutrage (mending) skills to remove or repair any flaws in the Breton pullovers, and the training takes two years.

La marinière gained huge popularity in the 1950s when paid holidays in France were extended from two to three weeks per year, and families packed Breton striped shirts for their seaside holidays.