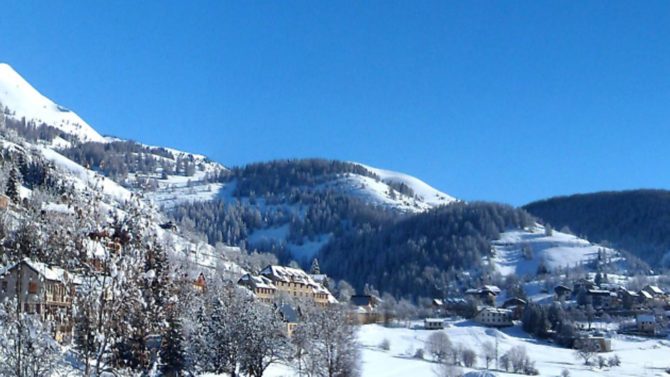 Leaving others to hurtle down the black ski runs of the Alps, Carolyn Reynier explores the lesser-known resorts in the south offering relaxed, family-friendly skiing

Some of us are addicted to the white stuff but are not necessarily mad about leg-breaking downhill skiing. So I thought it would be fun to have a look at some of the lesser known and lower key small family resorts in the southern Alps.

There are some slopes for ski alpin, certainly, but where these stations de ski really come into their own is for fans of cross-country skiing (ski de fond) and snow walking (randonnées en raquettes).

The four areas I have chosen are all easily accessible from Nice airport, they are in or near small villages in the Alpes-Maritimes back country, and they are all near the French Riviera, with Monaco and Italy on your doorstep. What more can you ask for?

Close to Nice is the prettily named Gréolières-les-Neiges in the hills behind perfume-making town Grasse, at an altitude of 1,400m to 1,800m. This small purpose-built resort lies at the end of the road around 10km above the medieval village of Gréolières, which overlooks the Loup valley with its waterfalls and gorges.

The ski domaine extends across the northern slopes of the Cheiron massif, covering an area in excess of 1,000 hectares. From the summit you have a 360-degree panorama of the Côte d’Azur, from the Estérel peaks in the west to southern Italy, Corsica (in clear weather) and the Alpine chain. The resort also has a popular Nordic ski centre with 30km of paths through a pine forest, plus two specially designed pistes for toddlers and young children.

“You can buy detached chalets (some with pools), terraced chalets offering duplex accommodation, and apartments,” says Jean-Marc Adler at Optimhome. Studios start from €45,000-€55,000, while one-bedroom apartments cost around €1,600/m², many benefiting from lovely terraces facing the ski slopes. The copropriété charges in these buildings can be high, so this is something to be aware of. Chalets, sometimes built in concrete and brick with timber cladding, sell for around €2,400/m².

While folk do live here all year round – Adler recently sold a duplex apartment as a main home – the primary market is for second homes. Snow cannons help ensure winter holiday homeowners have good quality snow but there is little organised activity during the summer season.

There are some guesthouses and lots of rental accommodation if you want to see what Gréolières-les-Neiges has to offer. Indeed, the resort could prove a good investment opportunity providing income either from seasonal rentals or long-term lets. It is Nice’s closest ski resort, which means you can have a dip in the Mediterranean in the morning and be on the slopes in the afternoon.

There is a grocery store open all year but you will have to fill the 4X4 up with petrol and draw out cash before you arrive.

Drive due north and you will come to the dry stone houses and traditional barns of Beuil and its neighbouring hamlet of Les Launes, lying at an altitude of 1,500m to 2,011m. Overlooking the upper Cians valley and its gorgeous red rock gorges, the ski domaine covers an area of 115km offering downhill and cross-country skiing and raquettes.

Beuil is an old, authentic village sitting on a hilltop, says Valérie Ravel at Agence Valberg. “Although the small ski resort – there is only one ski lift – is linked to the larger Valberg ski area to the west, people come to Beuil primarily for the snow walks and the family atmosphere. The village has all the usual shops for year-round living.”

There is one apartment building in Beuil, built in the 1960s and upgraded 20 years later. “I have 20m² studios for sale for €55,000,” says Ravel. “In general, apartments here sell for €2,000-€2,500/m² because the building is modern and near car parks and shops. Apartments in converted old stone village houses which can rise to four or five storeys are cheaper because access to the village is limited; for a renovated one expect to pay around €1,000-€1,500/m².”

The small hamlet of Les Launes, part of the commune of Beuil, is 3km to the west heading towards Valberg. There are no shops but you can find similar properties at cheaper prices. It has its own ski lift and is linked to the other ski slopes.

If you are looking for a more substantial property, Valérie Ravel is currently marketing a 160m² chalet at Les Launes priced at €220,000. She says you will pay around €300,000 for something similar around Beuil because you have the shops and services close by. These larger properties may be concrete or timber clad, built on plots of land bought several decades ago, while others are fine old stone houses. She says the handful of new-build timber chalets – she recently sold a plot for €60,000 – will sell for between €300,000 and €350,000.

We turn east now to Turini-Camp d’Argent. These two small resorts (Camp d’Argent is a little higher) lie near the Col de Turini and at the edge of the mighty Mercantour national park, an hour or so from the coast.

Billed as the family station of the Vésubie valley, paths for summer walking are transformed in winter into tracks for cross-country skiing and snow walking. There is also downhill skiing, and the resort of Camp d’Argent is well adapted to introduce young children to the joys of skiing.

You can buy small apartments (€60,000 for a small studio) in a converted former hotel-restaurant, and there are a handful of small chalets spread about, says Patrick Darmon of Excellimmo. Turini, a little larger, has several hotels and large chalets containing apartments of various sizes. Expect to pay around €60,000-€150,000 depending on size, and €250,000-€300,000 for a chalet.

The old village of Peïra-Cava, just 7km below, was originally home to important barracks in the sector. Today around 70 families live here year round, he says, driving up to Turini-Camp d’Argent for their cross-country skiing and tobogganing.

Prices range from €50,000 for studios up to €400,000 for chalets. His Peïra-Cava clientele is a mix of main and second home purchasers. He sells property to buyers who commute to work in Monaco, and to families who come up at weekends.

For our final destination, we head north to the Nordic ski centre at Castérino, a hamlet at 1,550m in the upper Roya valley close to the Italian border and gateway to the Vallée des Merveilles in the Mercantour national park.

In the commune of Tende, 90 minutes from Nice, Castérino is surrounded by superb summits including the 2,872m-high Mont Bégo, worshipped by the Neolithic shepherds of the Fontanalba and the Merveilles valleys. During winter weekends and holidays, you can hop on the snow train, le train des neiges, for a day at the centre.

“Given its proximity to the Mercantour national park, Castérino is a very protected zone,” explains Nadia Procarione at Agence Provencalpes Breil et Tende, “and this means that there is rarely property for sale.” She currently just has some land on the books for recreational use only, such as keeping horses, for example. “Generally, when people own a property here, they hang on to it,” she says.

You can rent hotel accommodation at the centre but if you want to regularly enjoy the range of activities offered by Castérino – including hiking and riding in summer or Nordic walking and sleigh rides in winter – you would need to look in the nearby villages for a property.

The nearest hamlet is Granile, a magnificent stone settlement on the narrow Castérino road. A quiet village, Nadia tells me that while the census says the population is 40, the reality is that it’s more like 17. Other houses are either second homes or inherited properties which the owners maintain but do not visit. A 53m² two-bedroom hamlet house on two levels with garden-terrace could be yours for €51,000.

A little further is St-Dalmas-de-Tende, 20 minutes from Castérino. On the village outskirts you could buy a two-room apartment for €39,500. If you plan to come en famille, and it is a large one, you could buy a 10-room property in the town centre laid out as two apartments, one on the ground floor (70m²), and one on the first floor (90m²) with fireplace, balconies and terrace plus a small garden, two garages and three cellars. This is on the market for €315,000.

So the white stuff is not just about black and red downhill runs. There are other less fraught but equally exhilarating sides to living above the snow line in France.

If you fancy gliding along through fragrant pine forests, or going for a sleigh ride pulled by huskies, or a little soft snowshoe shuffle, may I suggest you look no further than the southern French Alps.

More in Skiing in France