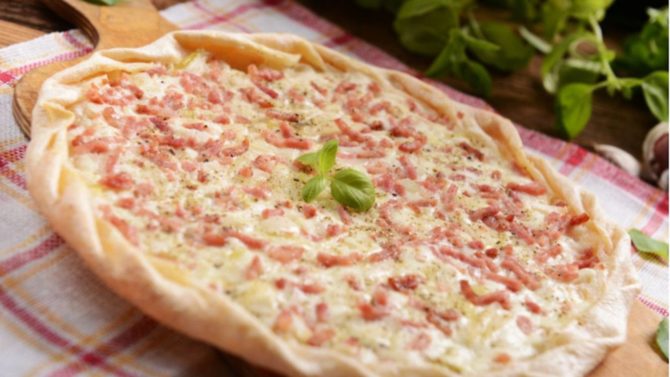 Cheese is such a key part of French cuisine that it’s no surprise there are lots of fromage-filled recipes to sink your teeth into!

Hailing from rural Auvergne, this hearty dish combines cheese and goose fat-cooked potatoes in a gloriously stodgy, pancake-like cocoction. Its name comes from a dialectal word for potato, ‘trufa’. The cheese used is usually tome fraiche, as normal tomme cheese doesn’t melt in the same way. It’s delicious served with a leafy green salad or some local jambon cru.

Get the recipe for truffade

Think of a profiterole made with cheese, and you’ve got a gougère; a bite-sized morsel of fromage fun. Usually made with gruyère or comté (but almost anything goes!), this savoury choux pastry ball is said to come from Burgundy, where it is a popular accompaniment to wine tastings.

Get the recipe for gougères

A warm goat’s cheese salad is the perfect summer dinner and is found on many restaurant menus in France – for good reason. Grilled goat’s cheese is delicately perched upon toasted bread and served with a light salad. A nice, sweet addition is some honey drizzled atop the chèvre chaud.

Get the recipe for chèvre chaud

A little piece of Pays de Galles in Northern France, this Gallic twist on the traditional Welsh rarebit is a divine combination of cheese, beer and mustard on toast, The recipe is said to have crossed the Channel with a Welsh garrison that was posted near Boulogne-sur-Mer in the 16th century. For some extra sustenance, add some ham and eggs to make the perfect ‘Welsh Complet’.

Get the recipe for Le Welsh

This Alpine comfort food is the ultimate source of rejuvenation after an energetic day of skiing or hiking in the mountains. Potatoes, reblochon cheese, bacon lardons and onions come together in the most delicious way to make this Savoyard dinner staple. It’s tastiest when accompanied by some green leaves, crusty bread and cornichons – but we won’t judge you if you eat it by itself, either!

Get the recipe for tartiflette

Cheesy, garlicky mashed potatoes are the order of the day in Aubrac, where this indulgent delicacy originated. A distant, smoother cousin of truffade, it was prepared for pilgrims and originally made with bread until potatoes came along to join the cheesy party. Enjoy with a glass of local red wine and a tasty sausage.

Get the recipe for aligot

Popular in north-east France and along the German border (where it’s also known as Flammekueche), this fromage frais-covered bread dish is topped with a liberal helping of onions and bacon lardons, then cooked in a wood-fired oven. Mouth-watering variations include the gratinée, with extra gruyère, and Munster, with the eponymous cheese added.

Get the recipe for tarte flambée

This quiche-like treat from Northern France and Belgium is usually made from distinctive orange-rind maroilles and is a hit dinner in its native Nord-Pas-de-Calais. Serve hot with salad and charcuterie, and pair with a sweet local cider.

Get the recipe for flamiche

Another Alpine ski resort favourite, this decadent dish combines cheese (often beaufort, comté or gruyère) with white wine, garlic and bread to make a cheesy sauce perfect for dipping bread, cornichons, onions and green leaves into. It’s a warm, cheesy hug after a day in the snow.

Get the recipe for fondue savoyarde

A lunchtime staple both in France and overseas, this omnipresent cheese and ham sandwich has spawned many variations: try the croque normand, with camembert and apples, or the croquet hawaiian with pineapple.

Get the recipe for croque monsieur

How well do you know your French cheese?

Must-try food specialities from each area of France

Previous Article How does recycling work in France?
Next Article What to ask (and tell) your estate agent when looking for a French property