Discover the cheapest cities in France to rent a property 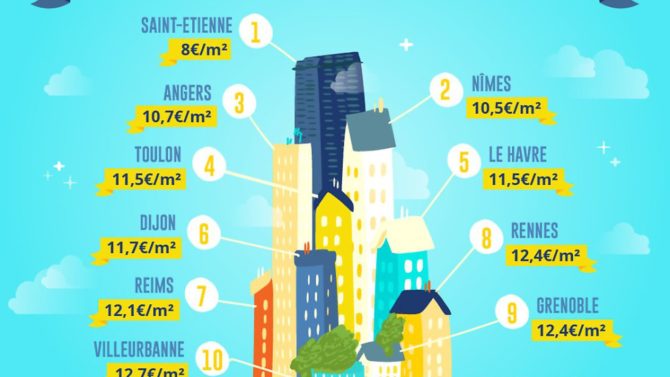 Property commentator Seloger has revealed the top 10 cities in France with the most affordable rental property – and they’re all fantastic places to live too!

Having reinvented itself from a 19th-century industrial city to the 21st-century ‘European capital of design’, Saint-Etienne has seen major regeneration. The city is the prefecture or capital of the Loire department in eastern France. At its centre is the spacious Place Jean-Jaures and Saint-Charles Cathedral; other impressive squares include the Place de l’Hotel de Ville and Place du Peuple. The nearest airport with UK flights is Lyon.

Known as the French Rome, due to its remarkably well preserved Roman arena and the Maison Carrée temple, Nîmes has a very active rental market. Set between the Mediterranean sea and the Cévennes hills, Nîmes is a great cheaper alternative to Montpellier. It has some fantastic modern architecture too, notably the Carré d’Art museum designed by Sir Norman Foster. Airports close by include Nîmes itself, Montpellier, Béziers and Marseille.

Capital of the Anjou province until the French Revolution, Angers was the cradle of the Plantagent dynasty and one of Europe’s intellectual centres during the reign of Réné of Anjou. Now prefecture of the Maine-et-Loire department, it is a cultural city with many museums and attractive architecture. Rents remain surprisingly affordable, despite rising (+2.2%) faster than inflation (+0.8%) in 2018. Nearest airports: Nantes, Tours.

Heading south to the Mediterranean coast, Toulon in Var is a large military harbour with parts of the port dating back to the 15th century. It also has Vauban fortifications. The historic Old Town has narrow streets, small squares with fountains and a renowned Provencal market. The relative affordability of Toulon rents is offset by strong demand. Nearest airports: Toulon, Marseille, Nice.

Back up north, France’s second-largest port city sits on the Seine estuary and has strong maritime traditions; the city and port were founded by Francis I in 1517. One of the two sub-prefectures of the Seine-Maritime department, Le Havre is a UNESCO World Heritage site, due to its modern architecture – architect Auguste Perret rescued the city from the ashes of WWII bombing. Nearest ports with Channel crossings: Le Havre, Dieppe, Caen.

This city certainly cuts the mustard when it comes to renting, good news for its tenants who represent 55% of the city’s population (source: INSEE). Historically the Capital of the Dukes of Burgundy, and today prefecture of the Côte-d’Or department, Dijon has some fantastic museums including the renowned Musée des Beaux Arts. It’s also known as a centre of gastronomy, and of course is surrounded by the famous Burgundy vineyards. Nearest airport: Dole.

10 reasons to buy a home in Charente-Maritime

The city where kings of France were crowned for over 1,000 years is known for its majestic Gothic cathedral and other religious buildings, but it’s also home to many of the most famous champagne houses, including Veuve Clicquot, Lanson, Taittinger, Pommery and Mumm; there are some 250km of cellars and Gallo-Roman galleries in Reims! The city is prefecture of the Marne department. Nearest airport: Paris.

Famous for its Transmusicales music festival and Rue de la Soif – the sociable heart of the city, it literally translates as ‘drinker’s alley’ – Rennes regularly tops the table of best city in France to live in. At the confluence of two rivers, the Ille and Vilaine, and capital of Brittany, the city has a long history, remnants of which can be seen in the old town, although most of the timber-framed houses were destroyed in a fire in 1720. Nowadays, it is an important telecommunications and digital innovation centre. You can fly from the UK into Rennes.

At the foot of the Alps, where the Drac river joins the Isère, Grenoble is known as the ‘capital of the Alps’ – the Chartreuse range is to the north, the Vercors to the south and west, and the Belledonne mountains to the east. Prefecture of the Isère department, the city is an important European scientific centre. Historically, it was often on the edge of the French kingdom and a key strategic stronghold, as well as being home to the Dauphin parliament until the Revolution. The Renaissance parliamentary palace now belongs to the Isère council and is undergoing renovation. Grenoble has its own airport, with Geneva, Lyon and Chambery all close by too.

Often named as one of the best places to live in the Lyon metropolitan area, Villeurbanne is (along with Boulogne-Billancourt) the second most populated suburb in France. As with all the other locations on the list, Villeurbanne has a university and several colleges, as well as part of the huge Parc de la Tête d’Or. It also has one of France’s most notable Art Deco structures, the twin towers of the Gratte-Ciel housing complex, the work of architect Môrice Leroux. For international tenants, it has the benefit of Lyon airport on the doorstep.

More in Renting in France

Previous Article Is it easy to get a French mortgage?
Next Article European elections in the UK and France