Can I disinherit my children? 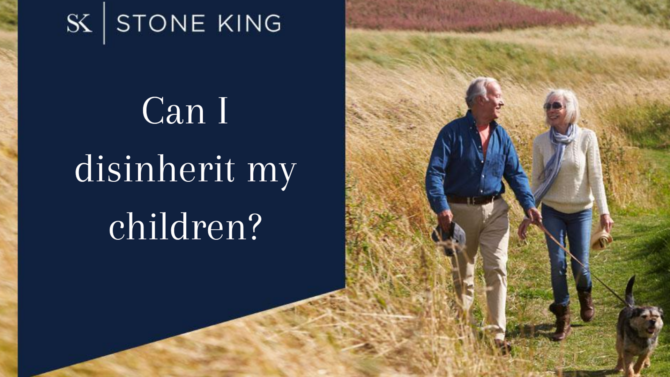 Charlotte Macdonald and Bryony Anning of Stone King LLP’s International and Cross-Border Team review a question from a client and discuss whether children can be excluded from Wills in the UK and France.

QUESTION – CAN I DISINHERIT MY CHILDREN?

Mark and Megan are a British couple who live in Cornwall with their teenage daughter, Maggie. The couple own assets in England and in France, including bank accounts, investments and a number of properties.

Mark has an adult son from his previous marriage, called Liam. Mark has had no contact with Liam for over 10 years, after Liam was caught stealing from various family members.

Mark and Megan need advice – they would like to put wills in place to cover their assets in the UK and in France. In their wills, they want to leave everything to each other on the first death, and then to Maggie on the second death. They do not want Liam to inherit anything.

As Mark and Megan own assets in England and in France – we will need to examine the laws in both of these jurisdictions.

In England and Wales, there is complete testamentary freedom. This means that, save for any legal challenges made against your will, you are free to leave your assets to whomever you wish.

It is possible for certain categories of people to make a claim against your estate under the Inheritance (Provision for Family and Dependants) Act 1975, commonly known as ‘the 1975 Act’.

Under the 1975 Act, a disappointed beneficiary can make a claim where the deceased failed to make ‘reasonable financial provision’ for them in the Will. Claimants can include spouses, former spouses, cohabitees, children (including adult children) or anyone who was being maintained financially by the deceased.

These types of claims are notoriously difficult to prove but they are on the rise. In determining the merits of the claim, the court will make an objective assessment and look at all the circumstances of the case, including the financial resources and needs of the claimant and whether the deceased had been ‘maintaining’ the claimant financially in the years before their death.

Importantly in cross-border matters, it is only possible to make a claim when the deceased was domiciled in England and Wales at the time of their death.

Do Mark and Megan need to take any action?

Under the law of England and Wales, Mark and Megan are free to leave their assets as they wish. They will be able to leave everything to each other on the first death, and then to Maggie on the second death.

If Mark dies domiciled in England, there is a risk that Liam will make a claim against Mark’s estate under the 1975 Act.

It is worth noting that it is very unusual for a financially independent adult child to bring a successful claim, however Mark is advised that he can reduce the chances of a successful claim being made by Liam by including a nominal gift to Liam in the will and preparing a confidential statement of wishes to accompany his Will.

In France, there are rules in place which determine how you can leave your assets. These rules are known colloquially as ‘forced heirship’ and they can take precedence over a will. French forced heirship aims to prevent family members, in particular children, from being disinherited.

If you have children, you must* leave you assets as follows –

If you are married but have no children, your surviving spouse is entitled to 1/4 of your estate. You are free to leave the remaining 3/4 as you wish.

What does this mean for Mark and Megan?

Megan has one child – Maggie. When Megan dies, Maggie will inherit 1/2 of Megan’s share of the French properties and Megan is free to leave the remaining 1/2 as she wishes.

Mark has two children – Maggie and Liam. When Mark dies, Maggie and Liam will each inherit 1/3 of Mark’s share of the French properties and Mark is free to leave the remaining 1/3 as he wishes.

French forced heirship rules prevent Mark and Megan from leaving their assets to each other on the first death. This could be problematic for the surviving spouse, because they may not be left with sufficient resources to look after themselves, and a property which is owned by multiple people can cause administrative difficulties and be difficult to sell.

It may be possible to override French forced heirship rules by using the European Succession Regulation (650/2012) (‘the Regulation’).

Under the Regulation, a person may elect for the law of their nationality to apply to the devolution of their assets in the EU**. This is particularly useful for British nationals who own property in France and who want the succession laws of England and Wales to apply when they die (i.e. testamentary freedom), rather than French succession law (i.e. forced heirship).

You will be pleased to hear that the Regulation has been unaffected by Brexit. This is because the UK did not opt into the Regulation, so has always been treated as a state outside the EU.

But it is important to consider the risks when making an election for the law of England and Wales to apply under the Regulation. You may open yourself up to the possibility of 1975 Act claims and you could inadvertently increase your liability to inheritance tax.

Can Megan and Mark make an ‘election’ in their Wills?

Mark and Megan are both British nationals and so can make an election for British law to apply in their Wills, thereby bypassing French forced heirship rules.

As Mark and Megan are most closely associated with England, English law will apply. This means that Mark and Megan are be free to leave their assets as they wish – everything to each other on the first death, and then to Maggie on the second death.

Changes to French Succession Law in 2021

A new French law has been passed, which could limit the effectiveness of an election under the Regulation. This new law is due to come into force on 1st November 2021 (subject to any last-minute repeal) and it will apply to deaths after this date.

This law will affect people who are giving away their assets in France, and include a British law election. It will only apply in cases where the deceased or their children were EU resident or an EU national.

In this case, the notaire (French lawyer) dealing with the estate administration in France would contact the children and explain to them that they have the option to make a claim against the estate. The children are not obliged to make a claim and can instead agree that the terms of the will should be carried out.

As this law is not yet in force, there is still an element of uncertainty about how it will work in practice. It is anticipated that this law will be challenged at a European level because it is in direct conflict with the EU Succession Regulation. We can therefore expect a further period of delay and uncertainty.

Will the change to French law apply to Mark and Megan?

Provided that none of Mark, Megan, Maggie or Liam are EU resident or EU nationals at the date of death, the change to French succession law will not apply.

If any of Mark, Megan, Maggie or Liam become EU resident or EU national in the future, Mark and Megan should seek legal advice as this law could limit the effectiveness of their Wills as they relate to the assets in France. We can advise Mark and Megan on their options, which may include changing the ownership structure of their properties in France.

* Please note that there are some ways in which forced heirship can be bypassed, such as tontine clauses and matrimonial property regimes but these are beyond the scope of this article.

** All EU member states have adopted the Regulation with the exception of Ireland and Denmark.