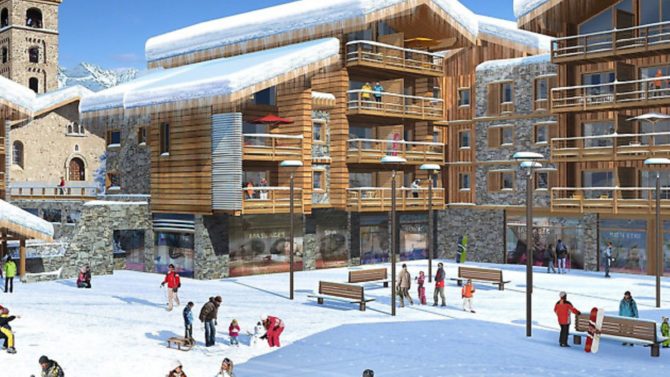 Alpine property developer the MGM Group has announced that work is getting underway on the final phase of a massive €100 million investment, which will see 130 more brand-new apartments created in what have proved to be three of the French Alpine ski resorts most likely to appeal to British tastes.

Richard Deans in the group’s London-based UK sales office says the move underlines MGM’s confidence in the burgeoning French Alpine property market and its outlook for 2014 and beyond.

The new schemes in Tignes, Valmorel and Châtel all comprise the second phases of recent MGM developments which have been so successful that, in each case, all but a handful of the phase one apartments have already been sold, many of them off-plan.

In Tignes, new apartments are to be added to the 108 completed by MGM in December at its ski-in, ski-out Kalinda Village development, a résidence de tourisme forming part of the new Tignes 1800 ‘gateway’ to the resort. With only 15 still available to buy, the company has stepped up its plans to start building 60 more later this year.

Only 10 of the 86 brand-new leaseback ski apartments under construction in the family-friendly pedestrianised French Alpine village of Valmorel are still available to buy but, for those who prefer to have unlimited access to their properties in a location that enjoys year-round popularity, MGM has announced that phase two of its Grange aux Fées development will comprise 37 apartments for outright purchase.

Meanwhile, close to Les Gets in the picturesque village of Châtel, a 90-minute drive from Geneva Airport, just 12 apartments are still available to buy in the first phase of Les Chalets d’Angèle, the MGM résidence de tourisme which was completed last year.

But within a matter of months, construction work is due to start on the creation of two new chalets together containing a further 34 apartments for outright purchase. Ranging in size from one-bedroom to three bedrooms, they are for sale at prices said to be “significantly lower” than those in many comparable resorts, thanks to MGM’s acquisition of the site on favourable terms a few years ago. The off-plan prices of these new apartments start at €240,000.

Background to the three new developments

Tignes 1800, the first and biggest eco-village of its type in the French Alps, is said to be a ‘state-of-the-art example of sustainable development.’ Kalinda Village forms a key part of the €150 million transformation of the old village of Tignes les Boisses into a modern ski centre.

The new eco-village was planned in response to the need for new accommodation for 1,500 skiers in one of the most popular skiing areas in Europe, while responding to the challenge of building a sustainable development. This included a strong desire to heat the properties in a cost-effective way which conserves fossil fuels and has low carbon emissions, despite being located in one of the coldest places in Europe. Winter temperatures typically are around minus 20 degrees.

Each apartment combines exceptionally high levels of insulation with low-cost under-floor heating supplied by an innovative new plant – the first of its type in the French Alps – run on biomass pellets made from wood waste to fuel a 4,000 kilowatt boiler. It supplies heat to all the buildings in Tignes 1800.

Four-star facilities within MGM’s résidence include an indoor pool, fitness suite, gym, sauna, jacuzzi and steam rooms, as well as an Ô des Cimes beauty centre with a variety of massages and treatments on offer.

The family-orientated pedestrianised village of Tignes 1800 includes a tourist information centre, 10 shops and a ski school as well as a choice of bars and restaurants with frontages on both the village square and the piste.

The off-plan prices of the new leaseback apartments in phase two of Kalinda Village start at €229,166 for a one-bedroom property with a floor area of 38m2, €291,000 for a 52m2 two-bedroom home. Prices exclude French VAT at 20% which is waived under the leaseback scheme.

Valmorel is at a ‘snow-sure’ altitude of 1,400 metres with access to 150km of pistes within the Grand Domaine area. It links the Tarentaise mountains dominating the Savoie region with the Maurienne valley. Just two hours’ drive from Geneva airport, it has enjoyed year-round popularity with French visitors since the seventies when it was built in the picturesque timber and stone style of a traditional Tyrolean village.

What makes Valmorel unusual is that, unlike so many other French ski resorts which opened their doors to countless developers during the building boom years of the past decade, the mairie (town hall) pledged to preserve the character of the village by turning down most applications for planning permission.

“Consequently, as the choice of properties available to buy is limited, prices will be forced up in the years ahead and that has to be good news for people who invest here now,” says Richard Deans.

In MGM’s favour, when the mairie considered its proposed plans, was its reputation as the leading developer in the French Alps – where it has been building ski properties for half a century – and its responsible approach to the environment.

The off-plan prices of the new apartments for outright purchase in phase two of Le Grange aux Fées start at €240,000 a one-bedroom property rising to €585,000 for a four-bedroom home.

Located near the French-Swiss border, MGM’s development in Châtel has been built in response to demand for year-round holiday accommodation from people who love the outdoor life. Activities like hiking, biking and riding are on the doorstep, while rafting, fishing and paragliding opportunities can be found nearby. In winter, snowboarding and bobsleighing can be enjoyed in addition to skiing in the world’s largest international linked ski area, the Portes du Soleil, which boasts 650km of slopes taking in eight French ski resorts and four in Switzerland.

Les Chalets d’Angèle is just 800 metres from the Super-Châtel cable car which carries skiers to an altitude of 1,645 metres where, in summer, walkers can enjoy numerous tracks across Alpine pasture and around lakes.

The off-plan prices of the new leaseback apartments in phase two of Les Chalets d’Angèle start at €191,666 for a one-bedroom property with a floor area of 43m2, €266,666 for a 50m2 two-bedroom home. Prices exclude French VAT at 20% which is waived under the leaseback scheme.

For full details of the new MGM developments, and more information about all the properties available from MGM, call 0207 4940706, email [email protected] or visit the website www.mgmfrenchproperties.com