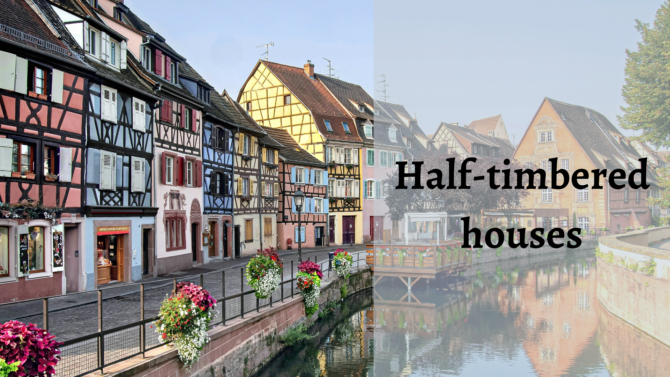 Half-timbering or colombage is an architectural style where the wooden beam framework of a building is visible on the facade of a property. The spaces between the joists are usually filled with either brick or a clay-based mixture such as torchis (cob), made from lime, chopped straw and animal hair. This is a construction method that dates back to the Roman Empire, but which gained popularity in France in the Middle-Ages before being later replaced with stone-based construction methods.

While some might recognise this style as being predominantly in Alsace or Normandy, it is part of the touristic landscape of Burgundy and Champagne too. Examples of half-timbered houses can be found all over France, but due to an abundance of wood resources in certain areas, for example the forests of Vosges in Alsace, and the ease with which the material could be transported, timber became the first choice of raw material for construction in those places.

Colmar is renowned for its picture-perfect pastel-coloured, half-timbered houses, while the Place Plumereau in the heart of the historic centre of Tours is lined with protected examples of the iconic architectural style. Timber was seen as a good insulator and resistant to subsidence, making it a fitting material for use in Alsace with its cold winters. In traditional construction of half-timbered houses, screws and nails are absent, with the structure reinforced through use of wooden pegs.

The pattern created by the squared timber beams was not only optimised for strength, but also as a symbolic representation decided by the owner. The corner post (poteau cornier) would be decorated with motifs, either characters, symbols or intricate column patterns. The St-Andrew’s cross is one pattern that can be seen in panels, which is interpreted as a sign of multiplication and fertility, for people as well as for animals. The Man, a shape made up of two K’s back-to-back, is believed to signify virility and physical strength. The diamond shape (losange) on the other hand is the sign of femininity and motherhood. Combinations of symbols were used to bring good fortune and others to ward off evil spirits.

The timber framing is often not precisely symmetric because of the length and shape of the beams, but this irregularity adds to the aesthetic charm. The buildings are often also corbelled, with the upper floors extending out over the footprint of the property. Done to increase living space and protect lower timber beams from the elements, this may also have helped avoid increased taxation based on ground space.

Previous Article Getting a French pet passport is harder as Brexit rules enforced
Next Article Easter in Paris: fun-filled family activities for all ages