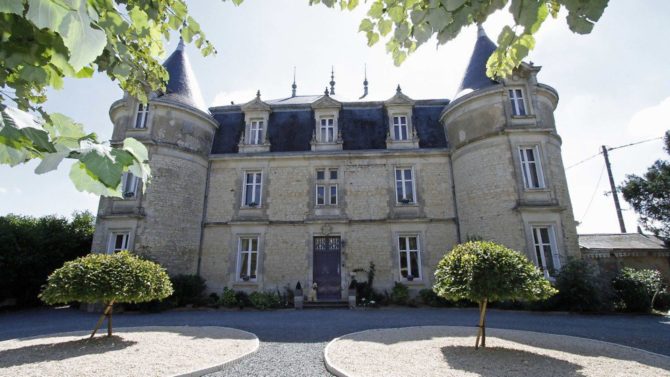 Dreaming of living in a French château? Your dream could be closer than you think… We have found a number of châteaux for sale in France for less than €500,000

Just 45 minutes from the coast and near the town of Niort is this elegant château that has been renovated to a high standard. There are nine bedrooms and six bathrooms including four luxury suites, two circular rooms in the towers and a private two-bedroom apartment. There is a sunny terrace, enclosed garden with ornamental pond, courtyard and parking. The château is currently run as a boutique hotel.

This stunning château has been split into two separate dwellings but it can be easily made into one property again. A few of the rooms need updating but most of the château has been nicely renovated and there are eight bedrooms. You approach the château via a tree-lined drive and there is 1 hectare of parkland including a fountain.

In the heart of the village of Giat in Puy-de-Dôme is this striking château. Spread over three floors there are eight bedrooms, five bathrooms, a kitchen, living room, dining room, office and large entrance hall. There is a walled garden to the rear of the château with a swimming pool and terrace and a gravelled drive with wrought iron gates. The village of Giat has all the amenities you need and the ski resorts of Le Mont Dore, Sancy and Chastreix-Sancy are close by.

On the edge of a market town, this striking château was constructed on the ruins on an earlier château and offers plenty of character and period features. Spread over three levels, the main house has seven bedrooms and two reception rooms and there is also a two-bedroom annexe with fully fitted kitchen and living room. The château has an enclosed garden with heated outdoor swimming pool and outbuildings and is within easy access of Le Mans, Angers and Tours.

This striking château has been well maintained and boasts eight bedrooms, a large living room and a smaller living room, a kitchen and an attic space that could be converted. The château comes with 1.2 hectares of land, a large outbuilding, an orangery, a sweeping drive. Located just 15 minutes from Albi, the château is only an hour from Toulouse airport and could easily be run as a boutique hotel.

This beautiful château was rebuilt in the 18th century on the foundations of the former château of the Comte de Montalembert. It is packed with character features including a sweeping oak staircase and the original vaulted cellars. The château now has eight bedrooms, three living rooms, a dining room and two kitchens and there is also an attic that could be converted. The château has grounds of 7,000m² with the possibility to buy a further two hectares and there is a two-bedroom guest house, open barn and workshops.

Quiz: Which type of property should you buy in France?

Escape to the Château: Dick and Angel’s tips for renovating in France