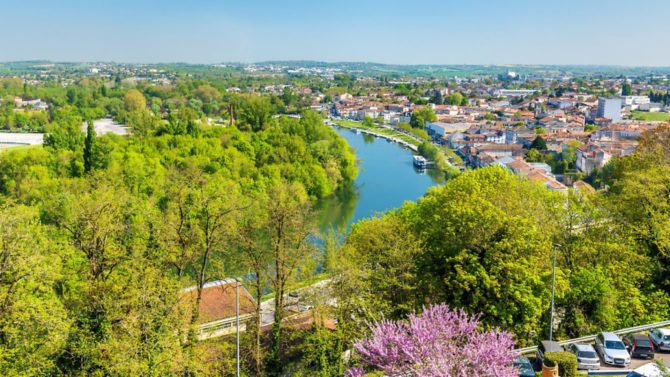 A better balance between work and home has become a priority for French people since the end of the coronavirus confinement, with many now keen to move to the countryside to enjoy a more rural way of life ‘au vert’. A study by Cadremploi and Figaro Immo has ranked the top 20 French towns for living and working ‘au vert’, based on average property price per square metre along with other criteria including unemployment rate, job opportunities, pollution level, climate, quality of schools, and journey time from Paris. With low average house prices and a dynamic job market, Angoulême Poitiers and Quimper were considered to offer a good compromise in terms of infrastructure, environment and property, coming first, second and third respectively. Arras, Tours, Rennes, Le Mans, Nancy, Angers and Bourges complete the top 10 thanks to their low average property prices and journey time of roughly two hours to Paris.

Green fact: The Parc de Blossac is the largest public park in Poitiers, composed of several different gardens and covering an area of nine hectares.

Green fact: An approach known as ‘differential management’ is used to manage the city’s green spaces in order to encourage biodiversity.

Green fact: The Citadel of Arras was once a military site but is now referred to as the city’s ‘little Central Park’.

Green fact: The Ecocentre de la Taupinais was established in Rennes in 2003 with the aim of encouraging greater environmental awareness among its citizens and promoting sustainable development.

Green fact: Known as the ‘ville nature’, Le Mans boasts over 350 hectares of open spaces within the metropolitan area.

Green fact: Nancy’s largest park is the Parc de la Pépinière, created in the 18th century and where the trees for the city’s grand new streets were cultivated

Green fact: The Art Deco Prés Fichaux garden is both a jardin remarquable and a monument historique.

Meanwhile, for those who want a rural lifestyle while still being less than an hour from Paris, a separate study of towns in the grande couronne has shown St-Germain-en-Laye in Yvelines to be the best place to buy a property. Located 20km from the city and accessible by the RER A, it offers plenty of green spaces and has an average property price of €6,080/m2, considerably lower than in Paris where the average has exceeded €10,000/m2. For properties for sale across France visit francepropertyshop.com

Find out more about the different regions of France here

These are the French properties in demand after lockdown

What does the end of confinement mean for the French property market?

Previous Article Quiz: How well do you know Alsace?
Next Article Pitfalls to avoid when renovating a French property