The best places in central Brittany to buy a property 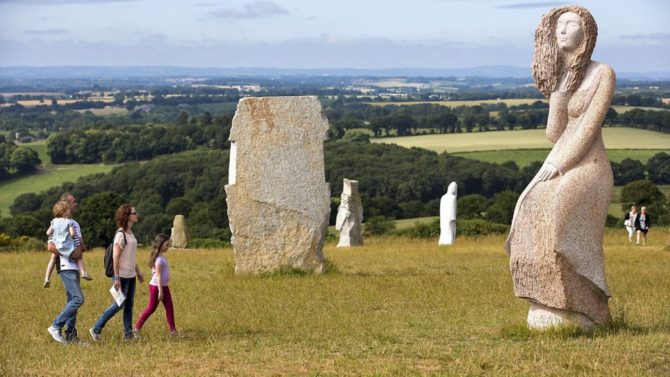 Inland Brittany has beautiful rivers, lakes, forests, mini mountains and megaliths – not to mention some of the cheapest property prices in France

Ever tried knife-throwing? Playing the harp? Roller hockey? Maybe you’re more of a Scrabble person. Do you like the thought of being able to watch films in French and English at your local cinema? How about taking a weekly language class in Breton, Cornish or French?

Ouf! It’s exhausting just reading the list of activities on offer in Callac. How this tiny town of just 2,200 inhabitants manages to offer so many activities is a marvel. But then, that’s the paradox of Kalon Breizh – the Breton name for the heart of Brittany. On the map it looks like the middle of nowhere. But go there and you’ll find yourself in the middle of somewhere very special indeed.

Some 10,000 holiday homes in Brittany belong to British nationals and almost 13,000 Brits live there. Although these expats account for only 0.4% of the population (a lower concentration than in Limousin, Lower Normandy, Poitou-Charentes or Midi-Pyrénées), you can’t fail to notice them – especially if you journey inland, away from the seaside.

Why do so many Brits gravitate towards this area? Sure, it’s handy for the Channel ferry ports. Sure, we have some shared heritage (the Bretons trace their roots to migrants who fled the westcountry during the Anglo-Saxon invasion). But it’s also a beautiful place with some of the lowest house prices in France. There are rolling hills and mini mountains, a lake for almost every village, emerald rivers and ancient forests brimming with myths and megaliths.

Then there’s the 360km-long Nantes-to-Brest canal snaking through the countryside and forming part of an astonishingly good cycle network. It’s virtually impossible to live more than an hour’s drive from the coastline that gave Brittany its ancient Gaulish name Armorica – meaning the place by the sea. Bustling Callac is only an hour south of Côte d’Armor’s pink granite coast; yet the median price of a home is €44,500 compared to €175,000 in Perros-Guirec. Medieval Josselin is an hour north of the Morbihan beaches, yet a home here costs an average of €100,000 compared with €507,500 in Trinité-sur-Mer.

Despite their high numbers, most Brits in rural Brittany will tell you they feel welcome and are appreciated for their contribution to the rural economy, which has been challenged in recent years by the loss of young jobseekers deserting the countryside.

Slap bang in the heart of things is central Brittany’s answer to the seaside. Lac de Guerlédan is the biggest of hundreds of lakes in the region, a sinuous 12km-long body of water straddling the border of Côtes-d’Armor and Morbihan. Most visitors park on the north bank at Beau Rivage, a small holiday village with a couple of restaurants and a sandy beach where you can paddle, swim and enjoy watersports or go for a lakeside walk.

Walk north from the lakeside and after 25 minutes you’ll come to the small village of Caurel, which has a primary school and a few eateries. A cycle path runs through the village and links it to the small town of Mûr-de-Bretagne 5km east, which is popular with Brits because of its many amenities and proximity to the lake. Beyond, the cycle path continues through the cobbled market town of Loudéac, with its fabulous free adventure park Aquarev, and on to villages such as La Prenessaye and Merdrignac.

If you cycled west from Caurel instead, you would soon come to the magnificent Abbaye de Bon Repos, which hosts an unmissable son et lumière spectacle every August, recounting Brittany’s history. Beyond this is Gouarec, a charming little town on the banks of the Nantes-to-Brest Canal with an attractive covered market and a significant British population. Indeed its Association Intégration Kreiz Breizh was set up in 2003 to help English-speaking newcomers settle into their new life in Brittany.

On the south side of Lac de Guerlédan is another small beach, at Anse de Sordan, and the Forest of Quénécan – known as Swiss Brittany – beyond which is the pretty town of Guéméné-sur-Scorff, popular with expats. From the lake’s south-east corner, a cycle path follows the River Blavet down to Pontivy, one of the biggest towns in central Brittany. An historic and pleasant town with a château, it also has several big supermarkets, DIY stores and garden centres, although don’t expect to find many open on Sunday. From Pontivy, the Blavet continues south through the pretty village of St-Nicholas-des-Eaux, past the lovely Chapel of St-Gildas, on its way to the sea, while the Nantes-to-Brest Canal splits off and goes east towards Josselin.

East: Josselin and beyond

A gasp of admiration is most people’s reaction when they first see Josselin. The historic town’s imposing château on the River Oust (part of the canal) can’t fail to delight; nor can its main square and high street with their colourful half-timbered buildings and smart cobbles. There’s a cinema, a hospital, library, towpath and popular Saturday market, not to mention a Breizh-British cultural events association. The town is much quieter in the winter months and the two supermarkets are closed on Sunday. Locals who need a DIY store, garden centre or Sunday supermarket usually drive 10 minutes east to Ploërmel, a bigger but plainer town, with a large leisure lake on its outskirts. Head east (there’s a cycle path) out of Ploërmel and you’ll come to the menhirs of Monteneuf, the tallest standing stones in central Brittany. Just north of here is the small town of Paimpont and villages such as Concoret and Tréhorenteuc. These are all good bases for exploring the Forest of Brocéliande, so-named because of its Arthurian associations. It is what remains of the Argoat as Bretons call the vast ancient forest that once covered inland Brittany.

Continue east and you’ll reach the university city of Rennes, recently hailed as the best city in France for investors. Beyond this is Vitré, a large and quaint medieval town with a fairytale castle.

Head north out of Josselin towards St-Malo and you’ll pass through several charming communities, including La Chèze, Moncontour and Jugon-les-Lacs.

Heading south, along the Nantes-to-Brest Canal, you pass through or close by to pretty villages such as Montertelot and Lizio, where one must-see attraction is the Universe of the Junkyard Poet (le poète ferrailleur), a fantastical place of fairytale towers and animated sculptures crafted from scrap.

Downstream you come to the former stomping ground of globetrotting New Zealanders Monica and Warren Brown, who lived in the area while house-sitting. “It’s a wonderful area,” says Monica. “We lived near Carentoir, which is a friendly little town and good value for money. There’s a lake, a hospital, a big supermarket, a nice pâtisserie. For more shops we’d go to Guer or to Redon, which is not as pretty but is a large centre.“Rochefort-en-Terre (voted France’s favourite village in 2017) is beautiful but it’s very touristy; I wouldn’t live there.

We did look for a house in La Gacilly though. It’s a stunning place with a brilliant outdoor photo exhibition in the summer and is the home of Yves Rocher (the cosmetics company has a shop, restaurant and botanic garden there). “We also loved Malestroit, the old town being somewhere we went often for a café and walk along the Nantes-Brest Canal. All the villages along the canal are lovely. Of course, we were also only one hour from the coast; I could go on and on about how much we loved it.”

Some of the lowest property prices in France can be found west of Lac de Guerlédan in pleasant communities such as Callac, Rostrenen, Belle-Isle-en-Terre, St-Nicholas-du-Pélem and Kergrist-Moëlou. It’s not a judgement on their attractiveness or community spirit but rather their relative remoteness from large centres of commerce and employment. Of course, that’s why many British buyers love this area, which is still only an hour from the coast and the port of Roscoff, although it’s less convenient for the other ferry ports.

Éidín Hernly has lived in Callac for several years and is reluctantly selling her 1930s eight-bedroom mansion as she needs to return to Ireland. As we’ve seen above, the small town has an action-packed social calendar, thanks in part to the Association des Amis, set up to promote integration between French residents and the large expat community. “It’s a lovely old-fashioned rural town where kids walk to school and there’s no pressure to grow up or to have the trendiest clothes,” she says. “For a small town, it’s really thriving and business-minded expats do very well here.” There’s a train station linking Callac to the TGV line at Guingamp and a Wednesday morning market while the larger nearby town of Carhaix-Plouguer has a Saturday market and bigger shops, and also hosts France’s biggest annual musical festival, Les Vielles Charrues.

Popular communities south of Callac include Gourin, Le Faouët (with its 16th-century covered market place) and, further west, Châteauneuf-du-Faou on the Nantes-to-Brest Canal. One of the major new draws to this part of the world is the Valley of the Saints. Described as a Carnac for the 21st century, it’s an ambitious long-term project to erect the statues of Brittany’s 1,000 founding saints – each hewn from a giant slab of granite – on the hillside above Carnoët, near Callac.

Close by are two other stone attractions that are rather more ancient but equally unmissable. Les Gorges du Corong, an extraordinary chaos of giant boulders strewn across a valley floor, lies a few miles south, while west of Callac is the magical village of Huelgoat with its mass of boulders wrapped in moss and mystery. “Huelgoat is a lovely place with a large British population,” says Éidín. “There’s a lake at the heart of the town and the gigantic granite formations in the gorge. It’s got a lot going on.” The commune of some 1,600 people lies at the edge of the Armorique regional park, a 125,000-hectare protected landscape of moorland, peat bogs and Brittany’s mountain chain, the Monts d’Arrées, known as the spine of Finistère. The climate is wetter and cooler in this part of Brittany than further east, but the Breton spirit and culture is also stronger, with language, music, dance and culinary traditions kept alive all year round. That’s the joy of this blessed region. The sea is its lifeblood, but the interior is its beating heart.

Previous Article Escape to the Chateau: DIY follows family’s wedding adventures in France
Next Article Where to buy a bargain beachside holiday home – and 9 other things we learned from the April issue of French Property News

See inside: A £47,000 renovated French cottage with a barn