9 houses for sale that make us want to drop everything and move to France! 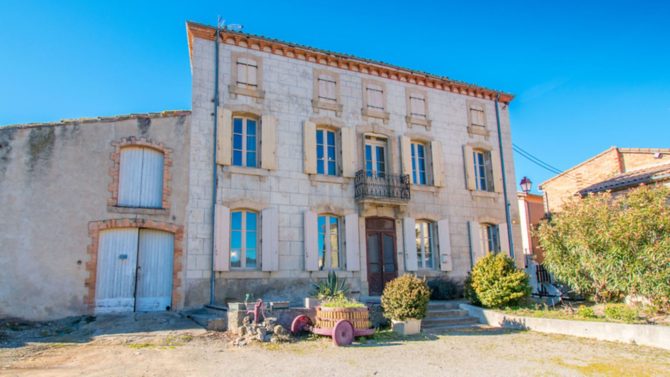 On the market for between €190,000 and €250,000, these fantastic French properties make us want to start a new life across the Channel right now!

€220,000, Dordogne
With the proceeds of a typical terraced house in the UK, you could move to this elegant maison de maître with sweeping views over the Dordogne countryside. It’s in the commune of Mauzac-et-Grand-Castang, less than an hour downstream from all the key tourism sites of the Dordogne and Vézère valleys.

There are three bedrooms on the first floor, a fourth bedroom in the separate apartment on the ground floor and plenty of storage space in the attic. The property requires some work, but at this price, that’s understandable. And best of all the only terracing here is in the garden, which runs to almost an acre.

€238,000, Gers
With its beams, exposed stone, white walls and pale painted wood, this three-bedroom country home is luring us to the beautiful province of Gascony in south-west France. It’s in a hamlet less than 10 minutes from lively market town Vic-Fezensac and 20 minutes from department capital Auch.

The manageable grounds of 600m2 include a pretty oval-shaped pool and a covered terrace for alfresco dining as well as a lawn and vegetable patch. There’s also a spacious outbuilding currently used as a garage and workshop. Toulouse airport is 80 minutes away.
Compass Immobilier
____________________________________

€244,000, Dordogne
We can just imagine life in this enchanting and reasonably priced stone double-glazed house a 2km walk from the village restaurant and a short drive from the local market towns of St-Yrieix la Perche or Excideuil. It has four bedrooms (three ensuite including one downstairs), two good-sized outbuildings, a cute old piggery and an alfresco deck at the back.

€222,600, Charente
A tasty business opportunity here! How about taking on this handsome restaurant with one-bedroom flat above is one of the most photographed buildings in Nanteuil-en-Vallée, a touristy village near Ruffec? It is available as a going concern or could, with relevant permission, be reconverted to a house.

€190,500, Pas-de-Calais
Why pay through the nose for a poky flat in the crowded South East of England when you could have a spacious detached house in the beautiful Canche valley of Pas de Calais for so much less? This blank canvas of a home only one hour from the ferry port of Calais and the Channel Tunnel, has five bedrooms, a three-car garage, parking space for another five cars, a wine cellar, store room and grounds of two-thirds of an acre.

€230,000, Lot-et-Garonne
With its covered terrace and tiled roof, this farmhouse looks cute from the outside. But inside it has high ceilings and surprisingly spacious rooms, including a beautiful kitchen-diner with exposed beams. Enjoying the best of both worlds, the property is set in 2,500m2 of land with country views, yet is only five minutes’ drive from the bustling market town of Miramont-de-Guyenne.

€197,500, Pyrénées-Orientales
No work to do here. Just arrive in the south of France and start living the good life. In a beautiful spa town at the foot of majestic Mount Canigou, this neat house naturally enjoys fabulous mountain views and could be a nice little earner too.

It’s in excellent condition (with reversible air-con) and currently arranged as a first-floor two-bedroom apartment and a ground-floor one-bedroom apartment, which the current owners have successfully let to holidaymakers. There’s also a garage/workshop and a rear terrace with a water feature.

€240,875, Côtes-d’Armor
Want to be in France but close to the ferries back to Blighty? Pas de problème! Brimming with Breton charm and period features, this classic granite and slate house is in the countryside near the popular town of Maël-Carhaix only 1h20 from the port at Roscoff.

€215,000, Aude
Quick! Pack the bags! We’re off to fix up this sleeping beauty of a mansion just outside Carcassonne. A renovator’s dream, the three-storey property is also in a knock-out location – a quiet village in the middle of wine country 20 minutes from the Unesco World Heritage Site of Carcassonne and 1h15 from Mediterranean beaches.

The mansion is set in 905m2 of land and has four bedrooms and some lovely period features. It is habitable, but needs new electrics, roof, insulation, and other cosmetic works, hence the tantalising price. Are you game? Allons-y!
Leggett Immobilier

Previous Article Brits in France will make their chalet business carbon neutral by summer
Next Article Beautiful south: 9 properties in Provence-Côte d’Azur for under €200,000