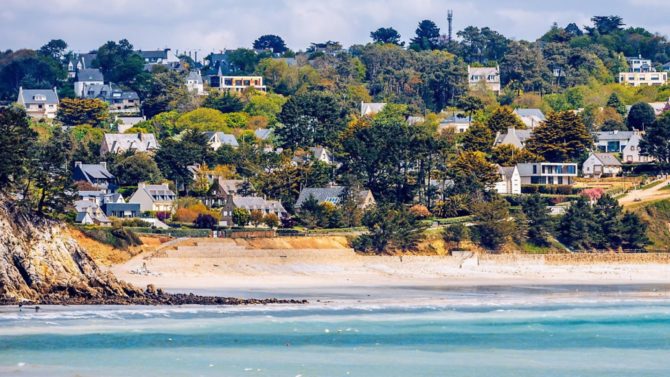 If you’re willing to compromise on your location, you really could buy a French coastal property for half price – or a lot less!

The glamorous resorts of the French Riviera are known the world over – just think St-Tropez, Cannes, Nice – but properties there certainly don’t come cheap, with an average price tag of €433,000 in Alpes-Maritimes, rising to an eye-watering €2.55m in St-Tropez.

Don’t worry though, with over 3,400km of coast, there’s a lot more to choose from in France – and when it comes to property, it’s all cheaper than the Côte d’Azur!

If you love the Riviera, you probably won’t want wild Finistère or laidback Landes though. You’ll be after a bit of glamour, with lots to do and bijou spots for people-watching.

Luckily, chic resorts aren’t limited to the Côte-d’Azur. Those in the know, including celebrities seeking somewhere off the obvious beaten track, head for places like the Ile de Ré or Biarritz on the Atlantic coast, and Paris Plage, or to give it its official name Le Touquet, and Deauville, with its casino and racing, in northern France.

Home to past royalty such as Napoleon and Empress Eugenie, Biarritz is the seaside capital of the Pyrénées-Atlantiques department, which has an average house price of €215,100. Not cheap, but less than half the price of Alpes-Maritimes! Biarritz is a major surfing destination, with sandy beaches backed by swanky Belle Epoque and Art Deco hotels. Neighbouring St-Jean-de-Luz is smaller and more exclusive.

Just off the Charente-Maritime coast, facing La Rochelle, Ile de Ré is another property hotspot, with an average house price of €420,000. Islands tend to be exclusive and it’s easy to see why this particular isle has become such a popular getaway for wealthy Parisians and celebrities, with its laidback chic providing an antidote to city living and the bling of the Med resorts.

Not as sought-after but lots cheaper (average €208,500), the neighbouring island of Oleron offers similar sandy beaches and pretty villages. La Rochelle is another great choice, with its picturesque harbour and winding streets full of restaurants and boutiques – the average price is €235,900.

Ever since the railway linked Paris to Le Touquet on the Opal Coast in the late 19th century, the seaside resort has been a second home to escapees from the capital. They stayed in swanky hotels like the Westminster (still there today) and built elegant villas in the pine forest behind the beach.

Not surprisingly, these sought-after homes don’t come cheap but you can find surprisingly affordable seafront apartments and houses in the streets behind the promenade. The average house price is €500,000, but neighbouring resorts like Cucq are much cheaper (€204,500).

Another prestigious resort in the northern half of France is La Baule, set in a beautiful bay on the Atlantic coast. With its luxury hotels, 9km-long sandy beach, elegant old villas, casino, spa and sailing harbours, this Loire-Atlantique resort doesn’t come cheap (average house price €361,000) but it does offer great value when compared to those Riviera hotspots, and you don’t have to travel far along the coast for prices to drop, for example, just €187,000 in pretty La-Batz-sur-Mer.

Dordogne is desirable but we still love a bargain in Brittany

Previous Article 8 things we found out in the December 2018 issue of French Property News
Next Article Do you want to know how you can save money buying a French property?