Check out these French properties with WW2 links 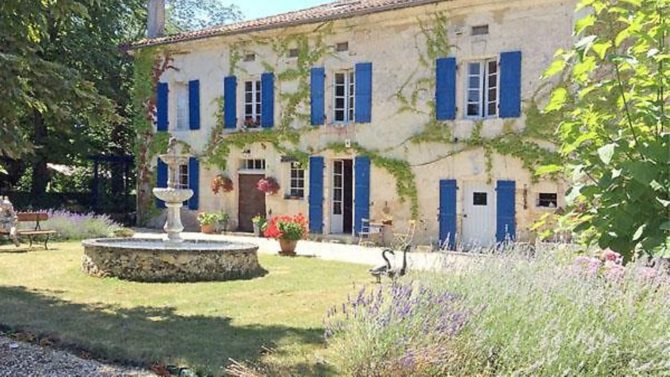 To mark the 75th anniversary of the D Day Landings, we look at six fabulous French homes with stories to tell from the Second World War

The breathtaking views from this home in Calvados are of the battlefields of the Falaise Pocket, where Allied forces encircled some 50,000 German troops in the decisive engagement of the Battle of Normandy. The episode, which took place in August 1944, six weeks after D Day, is commemorated in the Mont Ormel war memorial and museum three minutes’ drive from the property.

The house was traditionally built in the 1970s and has oil fired central heating and a woodburner. There are five ensuite bedrooms and a sixth bedroom with separate shower room, as well as a games room, gym, laundry room, boiler room, garage, cellar, workshop and storage room. The new owners will have 4.5 hectares of land at their disposal, including numerous fruit trees and large agricultural barn.

A group of French Resistance fighters set up base in this 18th century manor during the Second World War. Today it is more of a magnet to holidaymakers thanks to its two gîtes (which are being sold as a going concern) and its location 2.5km from a pretty town in the Périgord Limousin regional park 20 minutes from Brântome and handy for Limoges and Bergerac airports.

The property comes with substantial grounds that include a truffle orchard, bluebell wood, pools and tennis court. The main house has five double bedrooms (the master enjoying a balcony overlooking the gardens), an enormous attic and an attached barn with wine cave. The two spacious stone cottages are set around a courtyard and have five bedrooms between them.

If walls could talk, imagine the secrets they would spill about this manor in a village between Morlaix and Guingamp, just 45 minutes from the spectacular pink granite coast of Brittany. The stable block is an old chapel believed to date back almost 1,000 years to the days of the Knights Templar. Parts of the kitchen suffered damage during the French Revolution. The dining room and lounge areas have timber panelled walls with inset mirrors and medallions depicting Anne of Brittany, Francis 1, Henry IV and Minerva. And during the Second World War, the German area commander stationed here chose to base himself in this fine house within a few inutes walk of all the village amenities.

The property has three large bathrooms and a huge attic and is set in two walled acres of garden, fields and woodland with several outbuildings and a well.

Boasting seaside and marina views, this elegant property half an hour from Cherbourg ferry port was once an hotel occupied by the German forces during the Second World War. Now American tourists are more likely to come and stay as it sits on the coast at Quinéville, only 4km up the Cotentin peninsula coast from Utah Beach where American troops came ashore on D-Day. Ste-Mère-Eglise, the first village liberated by the Americans despite a paratrooper famously getting his parachute stuck on the church tower, is just 15 minutes down the road.

There are two sitting rooms, a conservatory, five bedrooms, two bathrooms, a mezzanine study, cellar and two other rooms to renovate. Outside is a walled low-maintenance garden with a gate leading to the marina and beach.

Keen anglers will love this magnificent 23-acre lakeside estate, currently set up as a carp fishing holiday business. And those fishing for its historical roots will soon learn it was a hotbed of Resistance activity during the Second World War. A plaque on the gate post commemorates its years as the headquarters of the French Resistance group in Charente led by a Colonel Chabanne. Indeed, the border between Nazi-occupied France and the Free Zone was very close and the National Memorial to the Resistance is just down the road in the town of Chasseneuil.

The 18th century house has four large ensuite bedrooms and is set in landscaped grounds with a pool and two lakes stocked with numerous fish. There are also two gîtes, with four ensuite shower rooms and two ensuite shower rooms respectively. All three homes have been renovated to luxury standards and benefit from oil-fired central heating, double glazing.

A hop, skip and jump from Cherbourg’s ferry port, this impressive 16th century manor was used as a temporary prisoner-of-war camp by the German armyduring the D-Day Landings but would now make a wonderful B&B. Utah beach is just 30 minutes away and Omaha, Gold, Juno and Sword are all within 90 minutes’ drive. Unlike the picture 75 years ago, the property today enjoys a peaceful setting in a hamlet 20 minutes from the bustling market towns of Carentan and Valognes and close to the village of St-Sauveur-le-Vicomte, whose city walls were breached by cannon during a siege in 1374 in what is believed to have been among the first successful uses of guns against city walls in history.

The manor, which boasts mullioned windows and stone floors, has four large bedrooms and a huge attic. There is also separate gite and a studio above the garage, while the grounds contain another four outbuildings, which could be converted into extra gîtes.

Previous Article Cash in the attic: A guide to French vide-greniers
Next Article How expat support groups can help you integrate in France