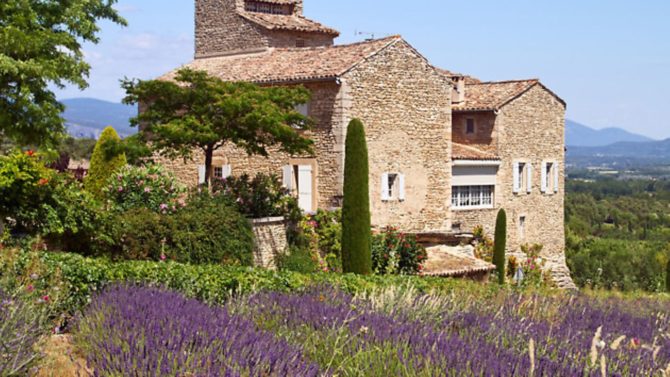 Not sure what a ‘bastide’, ‘colombage’or ‘mas’ is? Learn the features of 10 common types of French property so you can decide type of property you want to buy

The term mas can be used to describe any large countryside property in the southern regions of France, but is particularly used for properties in Provence. Originally a largely self-sufficient economic unit, it could produce its own fruit, vegetables, grain, milk, meat and even silkworms. It is typically constructed of inexpensive local materials (stone/wood), originally housing animals on the ground floor and having its bedrooms, food storage places and sometimes a room for raising silkworms on the upper floor. The mas is distinct from the bastide, another typical Provençal house, which was originally the home of a wealthy family.

The name ‘bastide’ originates from the name given to certain fortified medieval towns built in the 13th and 14th centuries. In property terms, it denotes a style of detached stone-built property found as far west as Aquitaine and as far east as Provence, which has a practical layout, square features and a tiled, almost flat roof. Originally occupied by wealthy farmers, it’s larger and more elegant than the ‘mas’ and its walls are sometimes whitewashed or covered with stucco.

The longère is one of the most quintessentially French property types, most common in Brittany and Normandy but also found in Limousin and other parts of western France. As its name suggests, it is built in a rectangular shape, normally with its back facing the most likely wind direction and using traditional materials, such as granite and slate. Many are one-storey and have converted attics to make a first floor. The stairs to access the attic would originally have been outside the house.

Literally meaning ‘master’s house’, a maison de maître is a bourgeois town or village mansion with an elegant, symmetrical façade. Known for its practical layout, many have high ceilings and typically four main rooms on each floor. It would originally have been the home of a squire or other minor landowner. A maison bourgeoise is another similarly elegant house, but without quite the same standing as the maison de maître.

Not to be confused with ‘charentaises’, which are old-fashioned carpet slippers! A Charentaise is a traditional, stone-built property found in the Charente department and throughout the Poitou-Charentes region. Although it varies greatly in size, it is similar to the bastide in terms of its practical layout and square features, although it rarely has archways. Steel ties can often be seen on the façade of a Charentaise; their original purpose was to reinforce the property’s structure, and they are now part of its typical decoration.

Essentially half-timbered, the framework of this type of house is visibly wooden, between which is either brick or lighter material such as torchis (cob) or plaster. Many longères have colombages, as well as certain townhouses. Colombage houses are reminiscent of English Tudor architecture and are commonly seen in Normandy, Burgundy and Alsace.

A fermette is essentially a small farmhouse in the countryside, often built in stone and consisting of a main house and a few outbuildings, such as a barn (grange) or shed (hangar). Many also have a reasonable amount of land, although typically much less than would have originally belonged to the property, as it would have often been sold off over the years as separate building plots. The term fermette does not necessarily denote an actual farm – it can simply be a house that has been built or restored in a rustic style.

‘Domaine’ translates roughly into English as ‘estate’ – a large plot of land accompanying a property or group of buildings, normally with a specific purpose – most commonly wine growing, but sometimes farming, shooting or golf.

The term ‘château’ can refer to a wide range of buildings in France, but the common – and acknowledged – denominator is its grandeur and prestige. Whether it’s a country residence surrounded by an estate or domaine or a moated, turreted seat with royal connections, the term applies. Although the 18th-century origin of the word ‘château’ is ‘chastel’, ‘château’ is frequently mistranslated as ‘castle’, when in fact the appropriate French equivalent is the château fort. Castles were built primarily for defensive purposes and have features such as arrow slits, battlements and fortified walls to withstand sieges.

Chalets can be found in the mountains and are now a favourite of skiers. Chalets were originally the huts of animal herders who owned a series of chalets and barns at isolated points along the annual migration route from the valley floor farms to the high pastures. They were generally used in the summer when the animals were in the high pastures. Chalets have a gabled roof with thick overhanging eves – designed to offer the rest of the building protection from the rain, snow and sun. The most typical chalets have a stone-built ground floor.

Previous Article Boeuf bourguignon recipe
Next Article The February 2017 issue of FRANCE Magazine is out now!