Buy one of these gorgeous 14 French properties near a château 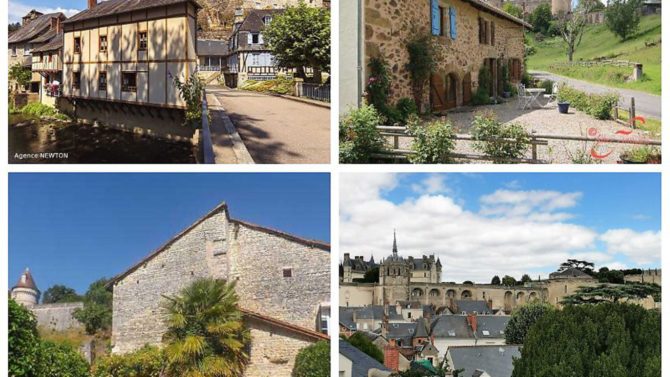 Love French châteaux but can’t afford to buy or maintain one? Why not buy a more manageable property close to a château instead – and enjoy the views instead of the costs! Check out our pick of 14 gorgeous homes for sale

This charming one-bedroom townhouse is situated right opposite the beautiful Château of Châteaubriant. In the centre of a vibrant town, it would make a lovely low-maintenance holiday home with holiday rental potential – we love the exposed stone walls and slate steps. The property boasts views of the château on one side and the rooftops and church steeple on the other.

Any property in Indre-et-Loire is likely to be close to a château but this three-bedroom apartment, set within an elegant 16th-century logis, is in the heart of the Royal City of Amboise, home to one of the most famous Loire Valley châteaux. From one side of the property you have views of the château, and on the other side there’s beautiful gardens. The stunning Renaissance building gives many châteaux a run for their money too.

Château views don’t come much better than this! Set beneath the ancient ramparts of Rochechouart, this three-bedroom riverside property is believed to date from the 16th century when it was occupied by the local tax collector who would stop all the travellers and merchants entering the town. It was constructed using rock that has its origin in the huge meteorite that struck this area over 200 million years ago!

On the banks of the Rivier Auvezère in Ségur-le-Château, this distinctive three-bedroom house has unbeatable views of the château. Throughout the house you’ll find beautiful original wooden floors and original features, and there’s a huge attic with exposed roof timbers. Now a designated Plus Beaux Village, Ségur was the seat of the Viscounts of Limoges who built their fortress here.

Surrounded by nature, this four-bedroom Provencal villa is 800m from the medieval village of Châteaudouble which, as its name suggests, is home to not one but two châteaux, one at the top of the village, the other on the River Nartuby. The hilltop village has beautiful cobbled streets and vaulted passageways. The property offers development potential and has a small studio ideal for friends or family, and a swimming pool, currently used as a lily pond.

With the magnificent Château Launay and ancient Chapel Notre-Dame de la Fosse as neighbours, this one/two-bedroom stone cottage is situated in an idyllic setting, surrounded by forest and woodland, yet is only an eight-minute drive to the historic town of Guemene-sur-Scorff with its bars, restaurants, schools and amenities.

There are three châteaux within 10 minutes of this four-bedroom village house, including the 14th-century Château de Crazannes, known as the Puss in Boots Castle as it was home to Jules Gouffier, Earl of Caravaz, who inspired the character of Marquis de Carabas in the fairytale. The property has a walled garden and pretty chalet style barn ripe for conversion.

It would be hard to locate yourself closer to a château, as this two-bedroom apartment with terrace is set within the converted winery at the Château de la Redorte. Shared facilities at this stylish development include a magnificent courtyard, sauna and swimming pool – ideal of soaking up all that wonderful southern sunshine.

In the centre of medieval Chinon – known for its majestic château – this one-bedroom house is a perfect bolthole for holidays and short breaks. The current owner uses it as a tourism rental which provides an excellent return. There is a large loft area which could potentially also be refurbished to provide a second bedroom, and the property comes with private parking, a rare luxury in town!

This character village house with roof terrace is a perfect lock-up-and-leave holiday home within easy reach of the vibrant city of Perpignan, the Mediterranean coast and Pyrenees mountains. The property is in the village of Salses-le-Château, with the château in its name being an impressive Catalan fortress dating from the 15th century.

In the heart of Gageac-et-Rouillac with its 12th-century château, this renovated character home has four bedrooms, two bathrooms and a small courtyard garden to the rear and lawn to the front. It’s only a 15-minute drive from Bergerac with its railway station and airport.

For sale fully furnished, this two-bedroom riverside house is in the centre of the pretty village of Verteuil-sur-Charente, which is dominated by its stunning château. Dating from 1080, the château has been extensively rebuilt and has typically Renaissance features with five conical towers.

This fantastic riverside home has been a successful B&B in the past and offers lots of business potential, not least being its location in the popular tourist village of Jumilhac-le-Grand, which boasts a magnificent medieval castle. The property has three rental apartments with independent access from the courtyard, plus two ensuite guest rooms within the main house.

With views of the 12th-17th-century Château de Bayers, this renovated four-bedroom village house offers spacious accommodation over three levels, along with a rear terrace and garden with a stream running along the bottom. The property is situated in a pretty village, 1km from Aunac and its amenities.

View these and many more properties on Francepropertyshop.com

Previous Article Stephen Clarke: How to re-learn the art of being Parisian
Next Article Win a copy of Canal du Midi: The Ultimate Guide in the French Property News book competition