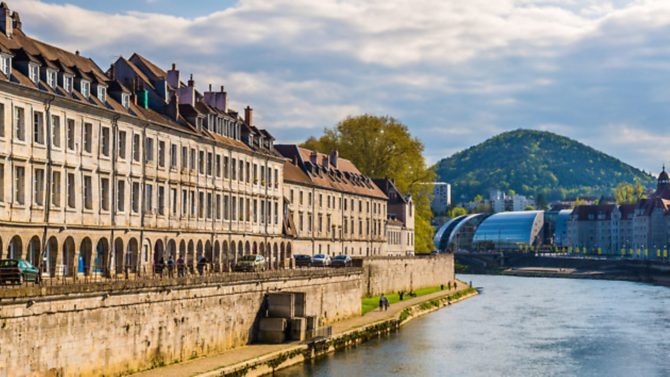 Dreaming of a stylish city-centre apartment in France for a small price? Paris and Nice might be out of your reach but you can buy an apartment in these 10 cities for less than €2,000/m²

If your idea of a perfect French property is a place with non-stop activity on your doorstop, from shopping to theatre, eating out to opera and museums to nightclubs, then you have plenty of choice in France – from Paris, aka the City of Light and the City of Love, to France’s second and third cities Marseille and Lyon and the other regional capitals. You can expect good travel networks to and from these cities too, all of which have international connections. If Paris is out of reach – where prices for apartments reach a heady €16,244/m² in the 7th arrondissement – why not consider a lesser known city, with fewer tourists and lower property prices.

One of France’s lesser known cities, Besançon is in the east of the country, capital of the Doubs department and former capital of the Franche-Comté region (now merged with neighbouring Burgundy to form the Burgundy-Franche-Comté region). Besançon is listed as a UNESCO World Heritage Site and boasts impressive fortifications and a beautiful citadel designed and built by Vauban. Thanks to its 2,408 hectares of parks, gardens and forests, Besançon is France’s greenest city and there are plenty of walking and cycling routes around the city. Besançon is around 2 and a half hours from Paris by TGV and a 4-hour drive.

Capital of the Pyrénées-Orientales department, Perpignan is just 30km from the Spanish border and was once Catalonia’s second city after Barcelona. Despite being transferred to France in 1659 the city feels as much Catalan as it does French with its distinctive orange and peach coloured buildings and streets lined with olive trees. The vibrant city is a mix of wide boulevards and winding streets with the imposing Palace of the Kings of Majorca and Le Castillet fortress guarding the entrance to the old city. Just a short drive away there are a choice of Mediterranean beaches. Perpignan has an airport with seasonal flights from the UK.

Capital of the Burgundy-Franche-Comté region, Dijon is the largest city in the region and the 17th largest city in France with a population of 152,071. Dijon is famous for its mustard and is the perfect city for foodies with numerous restaurants and cafes serving the Burgundy specialities of snails, boeuf bourguignon and coq-au-vin, washed down with the world-famous Burgundy wines. Shoppers flock to the indoor market at Les Halles designed by Gustave Eiffel. The old city centre is full of charming timbered houses and historical buildings. Dijon is only 90 minutes from Paris by train and around 3 hours by car. Here are 7 reasons you should live in Burgundy

Clermont-Ferrand is one of the oldest cities in France and once gained notoriety as the starting point for the Crusades. It is capital of the Puy-de-Dôme department was former capital of the Auvergne region (now merged with neighbouring Rhône-Alpes to form the Auvergne-Rhône-Alpes region). The city boasts a Gothic cathedral and one of the finest Romanesque churches in the area and is a great base to explore the Auvergne volcanoes or the Alps mountains. Clermont-Ferrand is 3 and a half hours from Paris by train and around 4 hours by car. Lyon airport has regular flights from the UK and is less than 2 hours’ drive.

The city of Orléans is best known for its famous protector Joan or Arc, also known as the ‘Maid of Orléans’. It is capital of the Centre-Val de Loire region and is close to some of the world-famous Loire châteaux. Orléans sits on the Loire River and the city is full of historic buildings including the Hôtel de Ville, the impressive Ste-Croix cathedral and the home of Joan of Arc. Orléans is just under an hour from Paris by train and around an hour’s drive.

One of France’s northern ferry ports, Le Harve is actually France’s 13th largest city by population. Almost completely destroyed during the Second World War and then rebuilt by Auguste Perret, Le Havre is a unique city in Normandy quite unlike the other coastal towns in northern France. Le Havre is listed as a UNESCO World Heritage Site and the buildings are bold and modernist. Yachts fill the marina and luxury villas overlook the beach. Ferries run from Portsmouth to Le Havre.

One of the smaller cities in France, Poitiers is the capital of the Vienne department and former capital of the Poitou-Charentes region (now merged with Aquitaine and Limousin to form the Nouvelle Aquitaine region). The city is home to around 80 listed buildings including some stunning Romanesque architecture, Roman ramparts, the remains of an amphitheatre and one of the oldest Christian monuments in Europe, the Baptistère Saint-Jean. Just a short drive away is the Futuroscope theme park. Poitiers has its own airport with seasonal flights from the UK, is just 1hr 45mins from Paris by TGV or a 3 and a half hour drive from Paris.

The city of Le Mans is known for the 24H du Mans race around the city but there is much more to the city than just a car race. The historic centre is named the Cité Plantagenet and is a delight of winding cobbled streets, colourful timer framed houses and Renaissance homes surrounded by Roman walls. Le Mans is full of interesting museums and historic buildings and from July until September these buildings are the base for spectacular light and music shows. Le Mans is less than an hour form Paris by TGV and just over 2 hours by car.

Limoges is capital of the Haute-Vienne department and was capital of the former Limousin region (now merged with Aquitaine and Poitou-Charentes to form the Nouvelle Aquitaine region). Limoges is known for producing porcelain and enamels, and there are a number of museums about the city’s crafts to discover. The town mixes historic half-timbered houses and Art deco buildings and there are a number of impressive squares, ancient underground tunnels and a trompe l’oeil to spot. Limoges has its own airport with flights to the UK and trains from Paris take just over 3 hours.

Saint-Étienne is the second largest city in the Auvergne-Rhône-Alpes region (after Lyon) and capital of the Loire department but it is not on the tourist trail. It grew as an industrial city and is now focused on design and technology, in fact Saint-Étienne is labelled a Cité du Design. Place Jean-Jaures is the heart of the city, it has statues, fountains and a bandstand and is enclosed by richly decorated buildings built by the wealthy residents of Saint-Étienne. Saint-Étienne is just under 3 hours from Paris by train or an hour’s drive from Lyon’s airport.