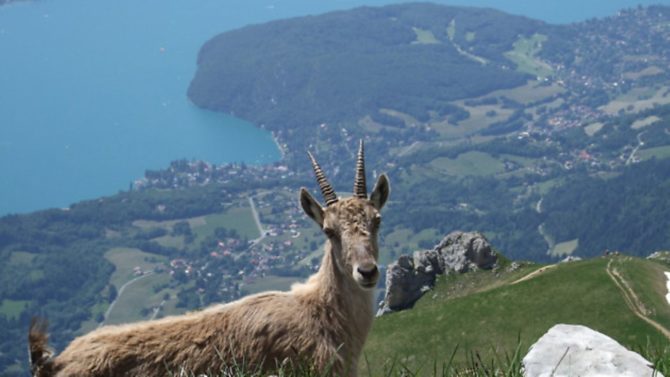 If a walk in the great outdoors for you means eyes to the sky, you couldn’t do better than the northern French departments, with their extensive coastlines of rugged clifftops and quiet coves. If you don’t want to travel far, the Cotentin peninsula and Baie de Somme are fantastic places to visit – but for a truly abundant display, head further south to the Pays-de-la Loire region. The Atlantic coast in particular is rich in seabirds, and if you head to the area between the mighty Loire and Garonne rivers, you are sure to see a huge variety of coastal birds due to the wetlands, marshes and fishing industries of this part of France.

South of Nantes, you will also find a nature reserve at the Lac de Grand-Lieu, the largest lake in France during the winter (the title being usurped in the summer by the Alpine Lac du Bourget). The entire nature reserve prohibits the use of boats, making it a perfect home for wildlife and birds. In the spring, the lake is awash with yellow and white water lilies, a spectacular sight to behold – made even more beautiful by the 2,000 pairs of herons that take up residence here during these months. And while the kids will be distracted counting the numerous toads and eels that spawn here, you can see how many of the 270 species of birds you can spot, including rare sights such as spoonbills and large egrets.

Property prices in Loire-Atlantique tend to be higher than in the surrounding areas but, with the average home costing €200,000, this still represents good value for money and only remains at that figure due to higher prices in Nantes itself. As is often the case in France, staying closer to the smaller towns and villages of the department will allow your budget to go much further.

The Camargue is the largest river delta in Western Europe, covering an area of over 900 square kilometres. It is a wild landscape of marshland, salt lagoons and long sandy beaches, teeming with wildlife and intriguing culture. The area is home to the farms of the Gardiens – the only cowboy tradition in Europe – whose families continue to rear herds of the famous white Camargue horses and black bulls, seen in the controversial bullrings across the border in Spain.

While the area attracts visitors throughout the year eager to spot migratory birds, one of the most spectacular sights in the spring and autumn is the thousands of pink flamingos that are attracted to the vast expanses of shallow wetland. Numbers can reach up to 20,000, all grouped in pairs and nesting in raised beds built out of mud. As the plains that are submerged in winter re-emerge as wetlands in the spring, hundreds of species of other marsh-loving birds flock here including black-winged stilts, godwits and sandpipers. Known as the capital and gateway to the Camargue, the town of Arles is rich in history and is a wonderful place to start your hunt for a home in this part of France.

Property prices in the region are fairly attractive, with the average home costing €223,500; higher than across the country but lower than most of the rest of the Provence region.

While the Pyrénées are home to many high-altitude species of birds (go to the Col du Tourmalet if you want to see flocks of snow finches), this mountain range is most celebrated for its birds of prey. The western parts are particularly renowned for the quantity and quality of eagles and griffon vultures that soar above the peaks. Those living in rural parts of France are probably used to seeing buzzards and kites flying overhead – especially in hilly areas – but heading out to the Pyrénées is well worth the trip. Make for Gavarnie to spot beaded vultures, or La-Falaise-aux-Vautours in the Ossau valley to see the largest French colony of griffon vultures as well as Egyptian vultures, peregrines and crag martins. For a truly spectacular display of migratory birds including black kites and cranes, head for the popular Organbidexka watchpoint in the Pays Basque, at an altitude of 1,283m.

The Pyrénées span the most southern departments of France including Hautes-Pyrénées, Pyrénées-Atlantiques and Pyrénées-Orientales. Many pretty villages lie in the valleys and on the slopes of the mountains including such popular haunts as Villefranchede-Confluent and the spa town of Argelès-Gazost. Property prices vary across the departments: the average price for a home in Hautes-Pyrénées is just €131,000, while in Pyrénées-Orientales the average home costs €170,000 and in Pyrénées-Atlantiques it will set you back €204,000.

If you are looking for a dramatic landscape – and dramatic wildlife to boot – you should head for the mountains, and if only the largest and most popular reserve in the French Alps will do, aim for the Vanoise National Park in the department of Savoie. During the winter months, the snow-covered landscape is flooded with British skiers making for the resorts of Val d’Isère and Tignes – but as the powder melts and the Alpine flowers reach out to the warming sun, the landscape completely transforms.

Comprising beech fir and pine forests as well as areas of grassland, the park is home to over 6,000 wild ibex, chamois goats, marmots and other small creatures such as badgers, hares and pine martens. It’s a well-protected environment with strict laws about picking flowers, making noise and feeding animals but it’s also open and free to visitors, who are permitted to camp out in mountain huts. This ease of access means there are plenty of opportunities to get close to nature and enjoy what the park has to offer. The park is also home to a number of wonderful mountain villages and towns including St-Martin-de-Belleville, Bessans and Bourg-St-Maurice.

Unsurprisingly, the cost of homes here is fairly high, with average property prices in the Savoie department coming in at €230,000. However, by avoiding the more popular tourist resorts, you will find plenty of properties in the park and surrounding villages for any budget.

If you have ever eaten in a traditional restaurant in the Alps – or entered any hotel lobby – you will doubtless have seen enormous stag heads adorning the walls or been swathed in soft sheepskin blankets to keep out the cold. Haute-Savoie is a harsh landscape and the types of wildlife that abound here are suitably accustomed to living on the steep slopes and in mountain conditions. The phenomenal hunting prowess of the golden eagle has led it to become king of the Savoyard Alps; if you are a novice birdwatcher and spot something circling above your chair lift on the slopes, chances are you are watching one of these surveying the skies for prey. Many creatures shy away from crowds, so if you roam off the beaten track you may catch a glimpse of a marmot sunning itself, or a family of mountain goats delicately finding their feet on the slopes. The most exciting creatures in these parts of the Alps, however, have to be the wild boar that make Haute-Savoie their home. If you don’t manage to see these in the wild, head to the wildlife park at Les Houches.

Influenced by upmarket ski resorts, property prices in Haute-Savoie are far higher than in most parts of the country; and with the average costing €340,000, they are over double the national average. If your budget can’t reach to what is required to buy in the prettier resorts and villages, take a look at the small towns along the A40 highway such as Sallanches, Skionzier and Cluses.