Emily in Paris: 3 Parisian apartments for sale that remind us of the popular Netflix show 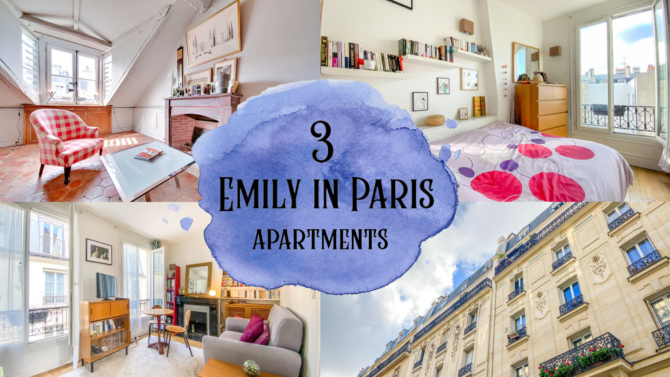 It’s hard not to wonder what living in Paris might be like when watching Netflix’s new series of Emily in Paris, and some might be wondering what price such an apartment might cost to buy. Here are three apartments for sale in the capital city that remind us of Emily in Paris, hopefully sans broken shower!

A one-bed apartment on the 5th floor

A stone’s throw from Voltaire metro, this one-bedroom apartment is on the 5th floor of a beautiful Haussmannian building. It has parquet floors and a chimney, and enjoys double exposure, on a clear day you can see the top of the Eiffel Tower in the distance from the bedroom window. There’s also a cute kitchenette, and I wonder how many of those books are in French… Oh and you’ll have to check if there’s a lift, and remember the ground floor is not the first floor! On the market with Leggett €345,000

At a prestigious address close to the Square Marigny and the Palais de L’Élysée, this two-floor duplex apartment is bright and quirky. The terracotta floor tiles and dormer windows do make the apartment look as if it should be featured in a certain tv show… It’s also above an antiques shop and there are some lovely cafés, cocktail bars, bistros and restaurants quite literally on your doorstep, I wonder if Gabriel is the local chef? On the market with Leggett €1,185,000

A one-bed apartment next to the Savoir office

Just around the corner from Savoir’s office on the Place de Valois, this one bedroom apartment on Rue Jean-Jacques Rousseau is on the second floor of a building that dates back to the 18th century, as you can see from its half-timbering and exposed beams. With a 10:30 start at work you’re hardly likely to be running late, but it’s always a bonus being just around the corner from the office, especially in the unfortunate event of a broken shower… It’s also sold furnished so you wouldn’t need to ship any heavy goods all the way from across the Atlantic if you suddenly found yourself transferred to Paris! On the market with Leggett €698,000

See where Emily in Paris was filmed

Previous Article 5 lesser-known Loire Valley châteaux to visit
Next Article Tax-free shopping in France: How can I save up to 20% VAT on shopping during my France trip!