Sunshine state: 10 reasons to buy your French property in Charente-Maritime 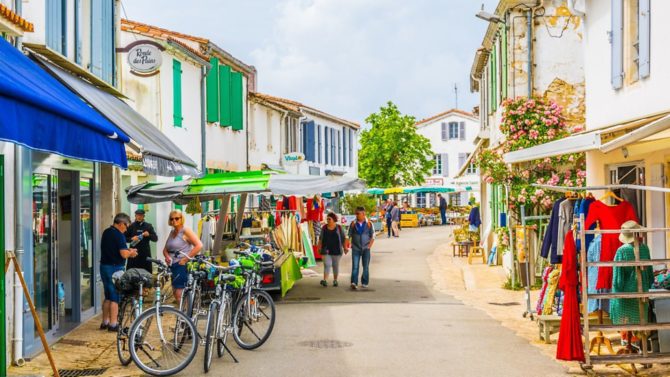 It is well known for its sunny microclimate and golden sandy beaches, but there are several other reasons to buy a home in this part of western France, says Julie Savill

The pretty town of Jonzac sits on a thermal spring and hosts one of the newest thermal spas in south-west France. The Chaîne Thermale du Soleil offers ‘cures’ for all types of ailments, from heart problems to arthritis, and it’s common for people to be referred by their doctor for an 18-day treatment! Les curistes, as the patients are known, give Jonzac a thriving market for rental properties for 11 months of the year as all these people need to stay somewhere.

If you fancy giving it a go there are mini ‘cures’ available. Six days to tackle your back problems, for example costs from €395, according to compagniedesspas.fr

2. You can go island-hopping

Off the coast of Charente-Maritime sits a chain of four islands, each with its own character and each worth a visit. Ile de Ré is the most glossy and glamorous. Accessed by a toll bridge (between €3 and €16 depending on your vehicle and the season), it has picturesque ports that buzz throughout the summer. Check out La Flotte, a tiny easy-going harbour town with waterside bars and restaurants; then zip along to St-Martin-de-Ré for elegant boutiques and smart cafés. If you are feeling even the tiniest bit energetic, hire a bike from one of the many outlets and take to the cycle paths explore more of the island.

Ile d’Oléron is wilder and more rustic, famed for its sea salt production, which can be seen at Le Port des Salines. Take a boat trip from Rochefort and sail around Fort Boyard, the location for the TV game show The Crystal Maze.

With a strong Napoleonic history, Ile d’Aix sits at the mouth of the Charente river. Napoleon ordered the construction of the semi-underground Fort Liédot, which operated as a military prison until the 1960s and which you can visit today. The fourth island is Ile Madame, a small, uninhabited place where you’ll find the charismatic ‘carrelet’ fishing nets on stilts, which make wonderful subjects for keen photographers. Check the tide times – it’s easy to get caught out!

The massive Gironde river winds its way from Bordeaux along the border of Charente-Maritime to the Atlantic. Along its banks are salt flats and reed marshes, fishing ports and some of the best bird-spotting opportunities to be found in France.

One feature you’ll notice on a drive along the estuary is a series of high-level platforms set in the fields and marshes. Straggly nests sit on top and in spring you’ll often see stork pairs who come back to the same nest every year to rear their young.

4. It has a bunker mentality

Dotted along the coast you’ll see the massive structures of WWII German bunkers and gun emplacements which were built by the German engineering organisation TODT and which formed part of the Atlantic Wall. Some bunkers can still be entered; some have slid into the sea or are gradually being buried by the sand. It’s easy to get lost in thoughts of how it must have been when they were in use. In Berneuil, near Saintes, you’ll also find a German military cemetery with thousands of graves of navy and army personnel as well as prisoners of war. This all stands as a reminder of how this country has not always enjoyed such peaceful times.

5. The apéritifs are amazing

Pineau and cognac grapes are grown over a large area in Charente-Maritime. The weather and soil seem to suit them well. Before dinner you might find yourself being offered a cognac Schweppes (cognac and tonic) and then at the end of the meal a café charentais (like an Irish coffee but with cognac). Pineau is another apéritif option. This sweet fortified wine is usually a blend of grape juice and cognac eau de vie. Like wines, it comes in white, rosé and red versions. Personally, I can’t really tell the difference – I like them all.

During the Hundred Years’ War, the Battle of Saintes was fought in 1351. Wales fought for France and there is even a monument in Mortagne to a Welsh soldier, ‘Owen ou Yvain de Galles’. The town is also worth a visit for its extraordinary Roman architecture.

From Saintes, head to Mortagne to take a look at the Hermitage St-Martial. This tiny and completely unspoilt site consists of two or three rooms and a chapel carved into the rock. It was first mentioned in Saint Martial’s life story a thousand years ago in 1020. From here it’s a quick hop to St-Fort-sur-Gironde to see the Tour de Beaumont. This is a magical place where tourists love to go for the fantastic views; the conical tower, built in the Middle Ages, served as a signal for sailors heading to the ports of Maubert or Mortagne. A fire was lit inside so it was almost like a lighthouse.

7. The food is delicious

You can’t be this close to the sea without seafood being big on the menu. Mussels, oysters, shrimp – all as fresh as you like and affordable too! Charente-Maritime toffee is legendary, made with local butter salted from the salt flats and called caramel au beurre salé. The local snails (les cagouilles) are another speciality of the area – there is a snail farm in Lorignac (charentes-escargots.business.site) and the local roundabout is decorated with 6ft-high snails! They breed small grey snails and feed them on clover. The snails are then cooked in a fish broth with white wine, tomato, garlic and breadcrumbs. You can even buy snail sausages.

You can’t really do La Rochelle justice in a day trip, let alone a paragraph. All I can say is, go there! It has a beautiful port, great waterside bars and restaurants, a huge aquarium, a cathedral and wonderful parks.

The great thing about Charente-Maritime is accessibility. Bordeaux is just 40 minutes away by train from Jonzac, the A10 connects to the autoroute network across France and into Spain. Skiing is three hours away. Fly into Bordeaux or La Rochelle airports and you can be at your holiday home in an hour. Gîte businesses do very well indeed, as do yoga and events companies as it’s easy to zip in for a weekend. Traffic jams are non-existent.

10. Did we mention the weather and the beaches?

Of course, these are the things that keep people coming back to the area. Most beaches, dunes and Atlantic coast forests are protected areas, many with no buildings at all. So bringing a picnic is a must! Many beaches can be reached only by a five to 10-minute walk or cycle through the pine forest and they are never crowded. Our favourite is relatively unknown. Check out La Bouverie beach, La Tremblade, on Google maps. This takes you to the car park, then you walk to the beach. But this is just between us, OK?

Previous Article Hotel in France crowned world’s most prestigious venue
Next Article How does the French post office help local communities in France?