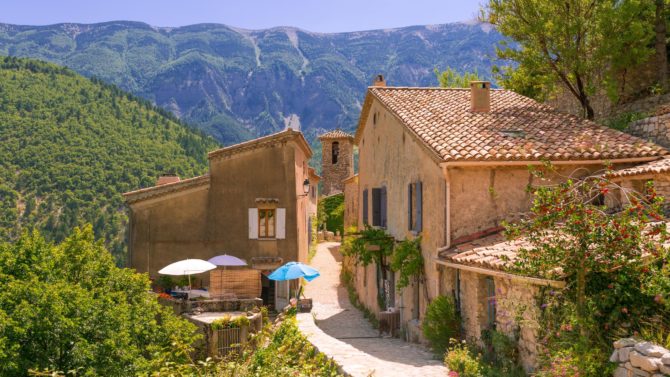 The French property system is highly regulated and protects the buyer, who doesn’t need to worry about being gazumped! Here are six reasons why it’s better than the English process.

In France, once a price has been agreed between the seller and buyer, contracts are signed straight away and are legally binding – not like in the UK, when the exchange of contracts can be months after you’ve had your offer accepted. The initial contract is usually the compromis de vente but may be a promesse de vente/achat. It can be drawn up by the estate agency or by a notaire; the latter is advisable if you want to add in any suspensive clauses. These are conditions within the contract, which if not met, allow you to withdraw from the purchase, and could be, for example, getting a mortgage. Completion – when the acte de vente is signed by all parties – usually takes place three or four months after signing the initial contract (compromis).

2) You won’t be gazumped

Because the contracts are signed early on in the process, you don’t have to worry about someone coming along and offering more money than you, ‘stealing’ the property from under your nose. Once the compromis de vente is signed, the seller can’t offer their property to anyone else.

3) The buyer has a cooling-off period

Furthermore, once you, the buyer/s, have signed the contract, you have a 10-day cooling-off period to reflect on the decision, during which time you can pull out of the contract without any penalty. The seller does not have this benefit; the contract is legally binding for them as soon as they’ve signed it. Note that if you do decide to pull out, you have to follow a set process to inform the seller of your decision.

In France, the estate agency profession is more highly regulated than in England. Estate agents must have a carte professionnelle (licence) proving their competency, which should be on display in their office, and also have a professional indemnity insurance cover and a financial guarantee for client funds. They will usually belong to one of these three professional associations, the Fédération Nationale de l’Immobilier (FNAIM), Syndicat National des Professionels Immobiliers (SPI) or Union Nationale des Propriétaires Immobiliers (UNPI).

Notaires (who oversee all property transactions in France and collect the associated taxes for the state) are also allowed to sell properties.

You may also come across an agent commercial immobilier selling properties. Although these agents don’t hold a carte professionnelle themselves, they work under the umbrella of a registered agent and must have an attestation that they are acting on their behalf. It is still the registered agent who processes the actual sale contracts.

While structural surveys are uncommon in France (you can still have one if you wish to), the seller is legally obliged to provide a series of reports (Dossier de Diagnostic Technique or DDT). These cover lead and asbestos; gas and electricity; natural risk and parasites (such as termites); energy efficiency; sewage and septic tanks; and radon gas. In addition, apartments or properties within a shared building need to specify the exact surface area.

6) Your agent could be your best friend!

While agency fees, which are paid by the buyer in France, can be relatively expensive (around 5% is typical), agents often help out with much more than just marketing a property. In particular, you’ll find agents who specialise in dealing with British buyers will really go the extra mile. This may mean assisting you with anything from setting up bank accounts or utilities to sourcing builders and other artisans, and translating for you if you are not fluent in French. They can also be a great source of information about the area where you are buying, which can be particularly handy for non-local buyers.

Previous Article Bargain French properties: Homes in Charente for sale under €100,000
Next Article I have a holiday home in France – do I need a French mobile number?