Say cheese! 7 unusual French cheeses to add to your cheese board 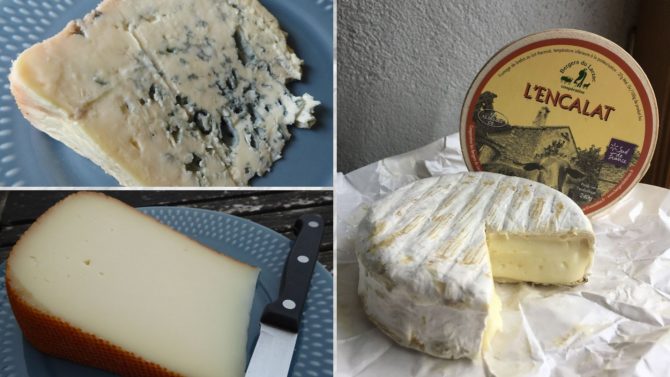 As FRANCE Magazine’s intrepid cheese columnist, Mark Sampson has an expert nose for rooting out some of France’s most delicious and unusual fromages. If you’re looking for a tasty Gallic addition to your cheeseboard, take your pick from these unusual French cheeses from across France.

A smoked Raclette, Le Brézain adds an exotic twist to a tabletop staple. In a radical experiment, my resident co-taster and I sampled Le Brézain in tandem with a traditional unsmoked Raclette from the same area. The flesh of the former, infused with wood-smoke, is understandably darker, more yellow than ivory. Its lightly smoked flavour, though, was less cheesy than the more robust un-smoked model. Both, however, were a delicious revelation: full of character, with a creamy, almost cloying consistency. Only the thought of adding it to a raclette grill restrained us from polishing it all off in one sitting.

My daughter described this medium-soft sheep’s-milk cheese as ‘like eating clean, pure snow’. On the label, the words pur brebis (ewe) are written in bold, and ‘purity’ is the operative word. For this is startlingly ‘clean’ and pure, like the air and vegetation of the high Ardéchois plateau whence this cheese derives.

In terms of its white flesh and mildness of flavour, it’s perhaps not too dissimilar to a good farmhouse Caerphilly. But there the comparison ends. Le Petit Pastre’s texture is slightly rubbery – incongruously like a red wax-covered Babybel. It keeps very well, however – easily for seven to nine months – and its character develops over time. I like this mild-mannered cheese. Next time, though, I shall keep it longer to see how it evolves.

This cheese is produced by the Fromagerie Duroux, which is based in the village of Rilhac-Xaintrie, not far from Pleaux near the Corrèze/Cantal frontier, but matures its cheeses 45km away in an old SNCF tunnel in the commune of Pandrignes.

Whether a 10kg grand or 3kg petit wheel, a Tome de Rilhac is labelled either Croûtée or Mitée according to its maturity. With spring on the horizon, I went this time for the former, matured for only one to two months. The rind is more white than stone-coloured and the crumbly-looking flesh more ivory than yellow.

It tastes clean, creamy and delicately fruity with no hint of acridity: ‘more open-field than barnyard,’ being my wife’s down-home description. The fromagerie’s owner, M. Duroux, recommends an Alsatian pinot noir and a good rye bread to accompany the kind of all-round qualities that have given his cheese regular shelf-space in this expatriate family’s fridge.

This soft cheese from Aveyron looks, feels and tastes like a good camembert, but is made with sheep’s milk. Cut into the soft blooming rind and the ivory flesh oozes onto the plate, just like a Normandy special. The surface of our L’Encalat was flecked with those telltale orange tints of maturity. It smelt and tasted utterly authentic, but with none of the acridity sometimes associated with a ripe bovine version. “Not nearly as scary as it looks,” my daughter with the sensitive palate suggested. this is a creamy, very unctuous cheese with plenty of character that slips down a treat with, say, a glass of dry white Jurançon. One could say it’s tailor-made for circumspect camembert fans.

A silver award at the Paris agricultural show of 2020 surely suggests a cheese of distinction. Infused during its affinage with a walnut liqueur from Sarlat, it’s a creation of the south west. The trademark heavily moustachioed swain in a floppy hat honours an obscure chapter in the region’s history: ‘Les Croquants’ being dissenting peasants of Périgord and neighbouring territories driven by the burden of taxation to rebellion in the 16th and 17th centuries.

The taste is every bit as distinctive as the surprising whiff of walnuts when you cut through the rind. Without the noix, it would be pleasant if unremarkable: a slightly creamy, cloying texture with a clean and delicate fruity flavour. But it’s the nuts that give this cheese its winning je ne sais quoi: a vaguely smoky quality that’s noticeably more pronounced when it’s eaten with, rather than without, the rind. Tailor-made to be savoured with a seasonal salad dotted with lightly toasted walnuts, it’s best accompanied by something local, like a Bergerac blanc.

If there’s one thing that my time as a cheese columnist has taught me, it’s the gulf between farmhouse and artisanal cheeses and the kind of pre-packed industrial cheeses found in the refrigerated section of a supermarket.  However, certain big brand cheeses are exceptions that prove the rule. Etorki could be the most exceptional. Like its lordly cousin, Ossau-Iraty, it’s a ewe’s milk cheese deriving from the far south west – from Mauléon-Licharre in the Pyréenées-Atlantiques.

Our youngster was medium-hard at most, with a smooth, unblemished ivory-white flesh. Leaving it in a drawer for a few hours, however, away from thieving cats, brought out all the subtle nutty aromas and the deliciously delicate flavours. It takes six gallons of ewes’ milk to make one wheel of Etorki. That milk may be pasteurised and the cheese may be pre-wrapped for supermarkets, but this was up there with the best: creamy and tangy with a salty edge that suggested lightly burnt caramel. All that it lacked, perhaps, was that tantalising hint of beast and pasture that you get with a farmhouse special.

As for the habit of eating it with black cherry jam, the domestic jury was divided. I blanched at the idea, but my daughter reminded me of cheddar with sweet pickle.

You could call this blue cheese a breakaway (or, unkindly, a poor man’s) Roquefort, since both cheeses derive from Aveyron. Unsurprisingly, there are similarities between the rivals – not least of which is the use of the penicillium roquefort to stimulate the blue mould during maturation.

Cut from wheels of around 3kg, a chunk of one resembles a chunk of the other: a crumbly, ivory-white, semi-soft flesh flecked with blue-grey veins, with no rind other than a vague discolouration. The difference lies in the taste. The best farmhouse Roquefort is surprisingly subtle. Although similarly creamy, the artisanal Bleu des Causses is very salty – but not overpoweringly blue: musty not mouldy, with no aggressive after-burn.

As the official video suggests, this is ‘a cheese imagined by man and matured by nature’. A little goes a long way. You wouldn’t want it in a sandwich, but it’s a fine after-dinner cheese in the company of a good dessert wine to temper the salinity.

Previous Article Why I swapped my life as a London doctor for a château in France!
Next Article A guide to the Dordogne market town of Lalinde