Dining with a difference – unique restaurants in Paris 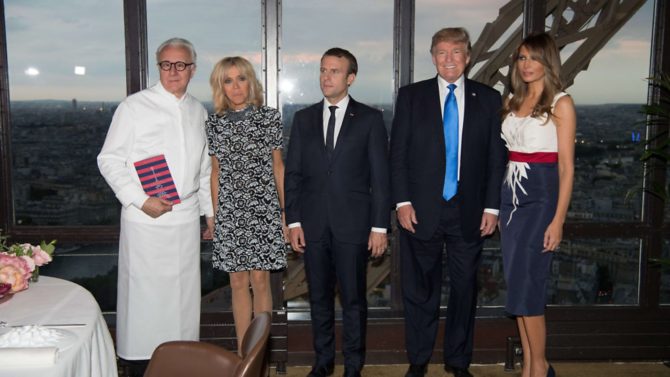 As a floating restaurant opens in Paris, we take a look at some of the city’s alternative dining experiences, involving famous rail carriages, secret doorways and eating in total darkness.

After being ousted from his prestigious Eiffel Tower restaurant, highly decorated French chef Alain Ducasse floated a plan for an in-Seine new eatery, just a stone’s throw away.

The culinary star had operated the Jules Verne restaurant on the second floor of the Paris landmark for the past ten years, with high-profile diners including Presidents Emmanuel Macron and Donald Trump.

However, when the restaurant contract came up for renewal over the summer, the board ruled in favour of his fellow French chefs Frédéric Anton and Thierry Marx and Monsieur Ducasse had no choice but to pack his bags.

The humiliating blow came as a shock but Ducasse quickly decided to hit back – by opening a floating restaurant on the Seine at the foot of the tower he called home.

Ducasse sur Seine is a £9.8million, 100-seat electric yacht, docked on the Right Bank at Port Debilly, that will serve lunch and dinner cruises.

But it’s far from the only quirky meal option in the City of Light, with plenty of interesting experiences on offer for the diner intent on an unusual evening.

Here are some of the more eye-catching options to keep in your back pocket for the next time you’re looking to impress:

Water way to spend an evening

Le Capitaine Fracasse will be among the competition for M. Ducasse’s new venture as it is already an established dinner cruise in the capital. Based only about 800 yards from the Eiffel Tower at Pont de Bir-Hakeim, the romantic gourmet cruise takes diners to Bercy and back, allowing them to take in sights such as the Musee d’Orsay and Le Louvre as they enjoy their meal.

Back on dry land, Le Wagon Bleu, offers a wonderfully nostalgic evening with the restaurant set inside a 1920s carriage from the Orient Express. The carriage has been kept in wonderful condition and looks just as it would all those years ago – for added character, even the luggage rack has been kept in place.

Bustronome takes the idea of the tourist bus and turns it up to 11. A double-decker bus with a panoramic glass roof offers lunch and dinner to hungry sightseers who can take in all the major sites of Paris en route around the City of Light.

Derriere is a clandestine restaurant hidden away in the Marais, so you need to be in the know to even find it, as there is not much to indicate that it even exists. If you can locate the unmarked front door, you’ll feel like a member of an exclusive club and due to the design and furniture, like you’re dining in a hipster friend’s home.

Dining in the dark

Dans le Noir offers a truly unique dining experience – by taking away the benefit of being able to see what you’re eating – or anything else for that matter. Diners are plunged into complete darkness with meals served by visually-impaired serveurs and serveuses. Offering a sensory experience like no other, a meal here will make you re-evaluate your perception of taste and smell – but maybe steer clear of a bowl of piping hot soup on this occasion.

While not strictly a restaurant, who could resist a trip to Le Café des Chats in the Marais? Cats aren’t just in the name, they’re well and truly in the café, which serves you coffee and pastries in the company of purring friendly felines. Set over two floors with lots of sofas and a grand piano, you’re sure to be joined by a four-legged friend.