The best restaurants in Lyon 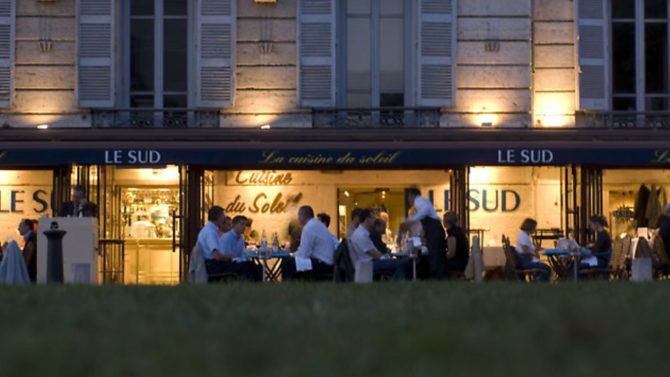 With over 4,000 restaurants and its very own Bouchons bistros, Lyon is France’s foodie capital. Here is our pick of the best restaurants in Lyon

When in Lyon, go to Paul Bocuse. As well as a three star Michelin restaurant, the world famous chef has four different brasseries in Lyon to accommodate gourmets on a tighter budget. The food at Le Sud is Mediterranean and evokes the freshness, spices and sunshine of the region. Starters on the menu include a marmite de pêcheurs à la Marseillaise –a rich, aromatic fish broth. For those who don’t fancy fish, there is a delicious starter of Serrano ham, aged for 20 months. Main courses include a squid stew à la Provençal and a free range chicken bocconcini –rolled-up chicken breast with melted cheese. Desserts are varied with choices from crème brûlée with vanilla pods, Chantilly-laden meringues and something no self-respecting lyonnais restaurant would be without –creamy Saint-Marcellin from the Mère Richard fromagerie. Brasserie Sud is just off Place Bellecour. For a special experience on a hot summer’s day or a balmy evening, eat on the terrace, which opens on to Place Antonin Poncet. Menu du jour from €22.90

You cannot visit Lyon without eating in one the many Bouchons in town. These local restaurants serve traditional, hearty dishes from Lyon and boast a friendly and welcoming atmosphere. With lovely red checked table cloths, pictures and earthenware on the walls, Daniel et Denise on rue Créqui gives off a homely feel to anyone who enters. Chef Joseph Viola, crowned Meilleur Ouvrier de France, makes sure tradition is upheld but in constant evolution at this bouchon. Starters such as grilled leeks served with sardines and apple, pâté en croute, or, if you fancy a warm starter, lamb sweetbreads drizzled in gravy set the tone for a heart warming meal. Mains include a traditional fish quenelle, grilled veal liver or filet of Angus beef flambéed in cognac. Hidden away in the little back streets not far from the Paul Bocuse food halls, this little gem is well worth the visit. Lunch menu from €21, dinner menu from €30

Brasserie Georges is an institution in Lyon. One of the oldest brasseries in Europe, it is big, beautiful and beloved by locals and tourists alike. The enormous art deco dining hall with its red leather seats and guilt-edged mirrors and the buzzing atmosphere is enough to make you stop and admire the sheer size of the place. The brasserie prides itself in the freshness of its products which come from highly regarded local producers in Lyon. The choucroute garnie and Lyonnais dishes such as sausage with pistachios are especially popular. But the brasserie is also known for its seafood, offering a wide selection of oysters and seafood platters. The restaurant also produces its own beer, a tradition which dates from its opening in 1836 by an Alsatian brewer called Georges Hoffherr. Brasserie Georges is located just a stone’s throw away from the river, opposite Lyon Perrache train station. Menu Lyonnais from €24.50

This off-beat little restaurant boasts an eclectic decor of baroque-inspired furniture, mirrors and paintings and flea-market kitsch, which works brilliantly. Each table is decorated individually, with coloured glasses, different table clothes and vintage crockery. The menu is largely French with Mediterranean/North African notes but. Starters include a casserole dish of tomato ravioli, salmon tartar and parmesan crumble and a butternut squash velouté with chestnuts. Main courses include a hearty cassoulet with Toulouse sausages, pork filet mignon coated with a black olive crust, and calf sweetbreads and kidneys with morel mushrooms flambéed in cognac. Located in the heart of the Vieux Lyon, La Nef de Fous is a popular restaurant that offers something different from the usual tourist destinations. Menu from €29.90

Located in the heart of the UNESCO world heritage district of Ainay in Lyon, le Poêlon d’Or used to be a wine cellar before it became a restaurant in the 1930s. Today, it retains a charming art deco design with a wood and stucco ceiling, an arch and a black and white tiled floor. Listed as a recognized ‘Bouchons Lyonnais’ it serves delicious and homemade traditional dishes with starters such as chicken liver pie, warm lentil salad served with cooked saucisson and an impressive artichoke head filled with foie gras pâté. Mains include black pudding, mushroom filled ravioli served with a creamy mushroom sauce or traditional pike quenelle. The extensive dessert menu features the famous half Saint Marcellin cheese as well as praline tart, violet crème brulée or a chocolate fondant. Menu Lyonnais €26.50

Located in the Vieux Lyon district, this Michelin-star restaurant is the five-star Cour des Loges’ hotel restaurant and is set in a stunning Florentine interior courtyard with a marble tiled floor and a spectacular glass roof. The talented young chef, Anthony Bonnet serves refined dishes that he creates using traditional food and a vivid imagination. Noble ingredients such as black truffle, foie gras or wild prawns make up the starters, whilst mains include char fish with cocoa and creamy mushrooms, lobster served with chestnuts and verbena butter, dry aged beef and lamb served with vegetables drizzled in nut oil. The selection of mouth-watering desserts range from poached pear with a spicy caramel sauce, grand cru hot chocolate and a seasonal and mysterious ‘gourmandise’. Five course menu from €95

This small and cosy restaurant serves traditional French dishes that have been creatively reimagined by the chef who insists that each dish is freshly made to order. It has a very limited menu and does not offer dishes à la carte but is often booked a week in advance which goes to show how popular it is, both with tourists and locals. The menu serves three starters with a butternut squash velouté made with pistachio oil and served with marinated squid, veal and Serrano ham ravioli served in a light Espelette chilli sauce and Gravlax salmon served with a curcuma infused mascarpone cream. Choose between a filet of sea bass served with seasonal vegetables and a Xeres vinegar tapenade or a duckling filet served with mushroom and parsnips and a full-bodied shallot jus. Desserts include a chocolate and rhum pudding with hazelnut ice cream and a vanilla and chestnut cream served with coconut ice cream. Menu at €29.90

Not sure what to see in Lyon between your meals? Read our Lyon city guide