The best museum restaurants in Paris

Time was, eating in a museum restaurant was a captive audience-no other choice experience. Their 'kitchen' usually consisted of a microwave and a coffee maker. Plastic forks? Paper napkins? Bus your own table?

Paris may have started the trend toward fine museum dining that could stand on its own. Some of the restaurants have become destinations in themselves. Here are the best:

The Musée d'Orsay has two.

The Restaurant at the Musée d'Orsay © Jerry Marterer - Credit: Archant

The Café Campana, near the Impressionist Gallery, was recently reopened with an Art Nouveau motif and a brasserie menu. Besides the tasty food, the best feature is the round glass face of the giant exterior clock where diners can look out at Sacré-Coeur in Montmartre.

The main dining room, called simply 'The Restaurant', was built in 1900 as part of the hotel that was incorporated in the former railroad station. Its Rococo ceiling could have come from Versailles. It serves traditional French cuisine in an elegant setting.

Inside the Musée Guimet is the best collection of Asian art in Europe and a great Pan-Asian delight, Le Salon des Porcelaines. Dim sum, sea bass with ginger, Thai-style salmon, and jasmine tea, make for a delicious midday meal.

The Musée Jacquemart-André, built in 1869, is a palatial mansion full of art and period furnishings. The one-time Louis XVI style dining room is a perfect place for lunch. No need to buy a museum ticket to dine there, so it has a regular following. Get there before one o'clock to get a table. 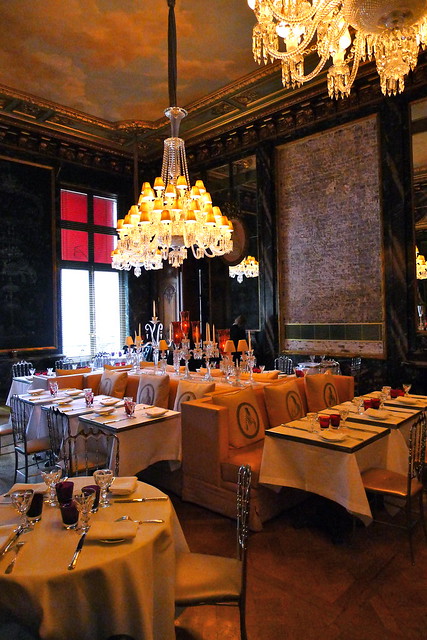 The Musée du Vin is set in a residential neighborhood. It's made up of miles of tunnels carved into the hillside of the old village of Passy in the 13th century to mine limestone for the building of Paris. They were later used by an order of monks for storing wine. In 1984, the long- abandoned tunnels were bought by a wine tasting society and became a museum that celebrates the history of winemaking. Any restaurant in such a venue had better be good! On a cold November day we dined on roast pork and lamb stew, paired with a robust red from the Rhône Valley.

Baccarat, the maker of luxurious crystal since 1750, relocated its museum to a former elegant mansion of a countess in 2003 and hired designer Philippe Starck to decorate it. Massive chandeliers hang above exhibits of one-of-a kind pieces from royal weddings and coronations. The Cristal Room serves elegant lunches and dinners, all on Baccarat tableware. It is expensive, but a great experience for a special occasion.

Bargain Properties: 15 French houses on the market for under €50,000

French drinks: 9 of France’s most iconic drinks, from Cointreau to...

Lakeside life: 8 wonderful houses with a private lake for sale in France