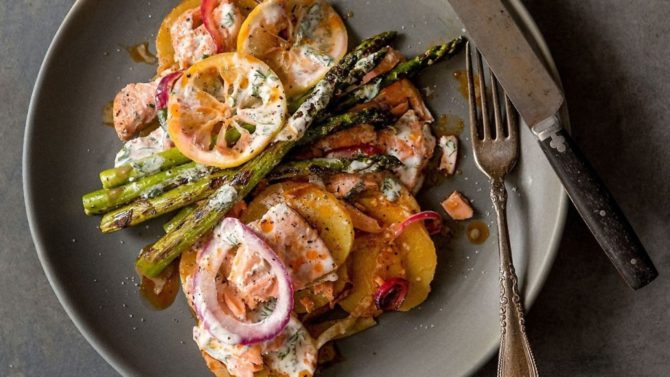 Try this flavourful baked salmon dish with charred asparagus from the cookbook Bisous & Brioche: Classic French Recipes and Family Favourites from a Life in France

Readers of Laura Bradbury’s bestselling Grape Series memoirs have been awaiting the secrets behind all the mouthwatering meals described in the stories about her life in Beaune, Burgundy.

Together with her friend, photographer and cookbook author Rebecca Wellman, Laura shares recipes in Bisous & Brioche that have been handed down through her husband Franck’s family or passed on by French friends and neighbours, and that now feature regularly on the menu at her house.

About her salmon recipe, she says: “The idea of gathering together meat or fish, some herbs and spices, and some vegetables, tucking them all up in a neat little package of parchment paper, and baking the package is a stroke of genius. This technique helps flavours combine beautifully and also offers plenty of scope for innovation and creative flourish.

“The asparagus in this recipe uses Franck’s special technique of charring the asparagus stalks at a high heat in a cast iron pan. We all love this dish at home, as the charring and blistering somehow seals in the delicate asparagus flavour while leaving the asparagus stalk lovely and tender. It is the perfect accompaniment to the delectable package of salmon – and countless other things as well.”

Rebecca adds: “Potatoes and salmon have very different cooking times. The trick is to ensure they spend enough time in the oven to cook them both sufficiently without overcooking the fish.

“Boil the potatoes until they feel a bit soft and the knife goes through with only a very slight resistance. Slice them as thinly as you can.”

1 tbsp vegetable oil (any oil with a high smoking point)

Stir together the yogurt and lime juice, and then mix in the dill, coriander, and red pepper flakes (if using). Season with sea salt and pepper. Cover and place in the fridge for at least one hour and up to overnight to allow the flavours to meld.

While the vegetables are boiling, stir together the olive oil and lemon juice.

Stir in the garlic and smoked paprika, add a pinch of sea salt, and set aside.

Set out four large pieces of parchment paper (each about 15 x 20 inches) with the long side facing you. Slice the potatoes into about ?-inch-thick rounds. Place the potato slices in the centre of each piece of parchment in two or three vertical rows, slightly overlapping. Season generously with salt and pepper. Drizzle one quarter of the oil mixture over the potatoes and place a salmon fillet vertically on top. Sprinkle with a pinch of sea salt and pepper. Top with lemon and red onion slices.

To make the papillote, fold both short sides of each piece of parchment over top of the salmon. You want each end covered by about one inch. Now bring the long sides up to meet in the middle above the salmon and fold them over on themselves four or five times to create a tight fold. Tuck everything in underneath the entire pack to create a neat parcel.

Place the packs on a rimmed sheet pan and bake until the potatoes are fully cooked and the salmon is medium-rare (about 120°F), 15-18 minutes. Once you’ve checked the temperature, fold the fish back up in the parchment to rest for five minutes. (Another way you can tell if the salmon is cooked is to flake it with a fork. If it comes apart easily, but is still moist and glistening, it is ready.)

While the fish is cooking, warm a large cast iron pan over high heat and then add the vegetable oil. Once the oil is hot, add the asparagus and cook, rolling around, until all the edges are slightly blistered and browned, 5-7 minutes. Season with salt and pepper.

Plate the potatoes and salmon with their onion and lemon slices, making sure you pour any residual smoked paprika oil over top. Top with the asparagus and drizzle with about 2 tbsp of the yogurt sauce. Serve with the remaining yogurt sauce in a bowl on the side.

Previous Article Selling your French house: when do you need a tax representative?
Next Article French property: The best ways to find reliable tradespeople

By Laura Bradbury And Rebecca Wellman