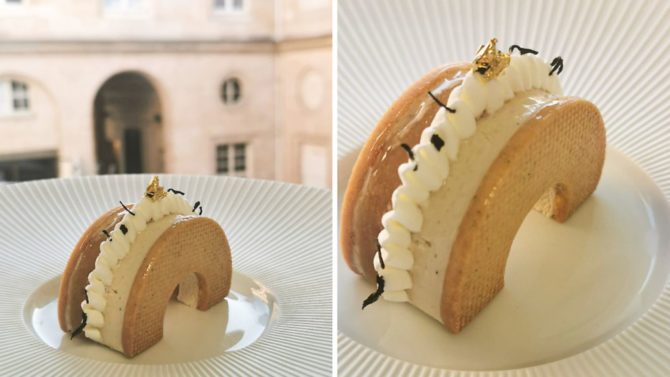 An official dessert has been chosen by the French Embassy in London and the British Embassy in Paris to celebrate the connection between the two countries. The ‘Paris-Londres’ was created by pastry chef Guillaume Godin of Restaurant Guy Savoy (Monnaie de Paris), as part of a culinary initiative launched in November 2020 by French Ambassador to the UK, Catherine Colonna.

Guillaume Godin’s winning dessert is an apple tarte tatin with Darjeeling tea mousse, set between pâte sucrée and decorated with vanilla Chantilly cream. It will be served at the French Residence in London and the British Residence in Paris.

Taking inspiration from the well-known ‘Paris-Brest’, originally a cycling race between the two French cities, and the popular wheel-shaped pastry of the same name which was created to commemorate the event, the ‘Paris-Londres’ initiative gave French and British pastry chefs the opportunity to create a dessert which would become the symbol of the Entente Cordiale and the long-standing link between the two countries.

A post shared by France in the UK (@franceintheuk)

“Guillaume Godin brilliantly succeeded in marrying the tastes and cultures of France and the UK by creating this veritable bridge between Paris and London,” commented French Ambassador to the UK, Catherine Colonna. “It clearly symbolises our gourmet initiative and also reflects how the UK and France remain close and have much to do together.”

“We were won over by the flavours of this dessert, which so effectively embodies the links between our two countries on each side of the Channel,” said British Ambassador to France, Ed Llewellyn. “We are delighted to be associated with this excellent initiative, allowing us to continue writing the history between France and the UK, from both a playful and gastronomic perspective.”

Explaining the inspiration behind the winning dessert, chef Guy Savoy said: “Behind the ‘Paris-Londres’ is a melding of two countries and cultures through flavours such as Darjeeling tea and the way the apple, a seasonal fruit common to both countries, has been prepared. We wanted to draw inspiration from the famous bridges of the two major capitals, London and Paris, with the Pont Neuf, very close to the Restaurant Guy Savoy at the Monnaie de Paris, and the legendary Tower Bridge.

UK-France treasure hunt with £650,000 prize to be launched in April

Previous Article Armchair travel: 21 virtual tours in France to try in 2021
Next Article Buy a French home near beautiful Béziers