Michelin stars 2021: French restaurants in the UK top the list 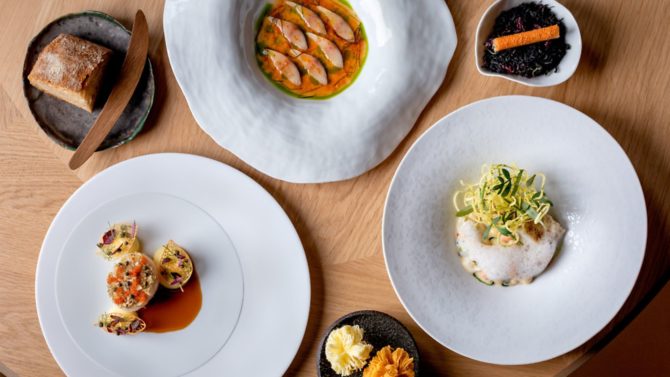 As well as the coveted three stars, this year’s awards also included a Michelin Green Star recognising sustainability in the industry

This year’s Michelin Guide Great Britain and Ireland has been unveiled and includes stars for many French restaurants in London and the rest of the country.

Hélène Darroze at The Connaught gained three stars, one of only two restaurants to be promoted to the highest award in the capital. Michelin said it was an extraordinary achievement in any year, but particularly impressive at a time when the hospitality industry has faced so many challenges due to Covid-19 restrictions.

Hélène has created a loyal following for her restaurant in the legendary Mayfair hotel, with a menu that combines traditional produce from her native Landes in south-west France, coupled with some of the finest ingredients from the British Isles.

Hélène Darroze at The Connaught opened in 2008, gaining her first star six months after opening, and her second in 2011. The restaurant had a redesign in 2019 by Pierre Yovanovitch, creating an Armagnac Room and her first Chef’s Table in the kitchen. Hélène was also recently awarded her second star in the 2021 French Michelin guide for her restaurant Marsan par Hélène Darroze in Paris.

“It is with immense emotion and honour that I receive this award,” she said.

“My appreciation goes to the small suppliers who have helped us, especially the wonderful and emerging British producers, without whom good cooking would not be possible, and need our support at this time.”

The restaurant joins The Waterside Inn, in Berkshire and Alain Ducasse at The Dorchester, in London, which both retain their three stars.

This year also saw the introduction of the new Michelin Green Star, which highlights restaurants at the forefront of the industry when it comes to their sustainable practices. Whether they champion local producers, grow and rear their own produce, fight against food waste or lead the way in removing non-recyclable materials from supply chains, they are selected by Michelin inspectors for holding themselves accountable to the highest ethical and environmental standards.

There were 23 restaurants which received this award including Belmond Le Manoir aux Quat’Saisons in Oxfordshire, the vision of chef Raymond Blanc. Its two Michelin star restaurant celebrates some 90 different herbs and vegetables from the two-acre kitchen garden and it also runs its own gardening school.

Other French restaurants to receive stars in the Michelin Guide Great Britain & Ireland 2021 include:

Hélène Darroze at The Connaught, London

Alain Ducasse at The Dorchester, London

This year the guide is being published in a digital format only, via guide.michelin.com/gb/en and the App Store.