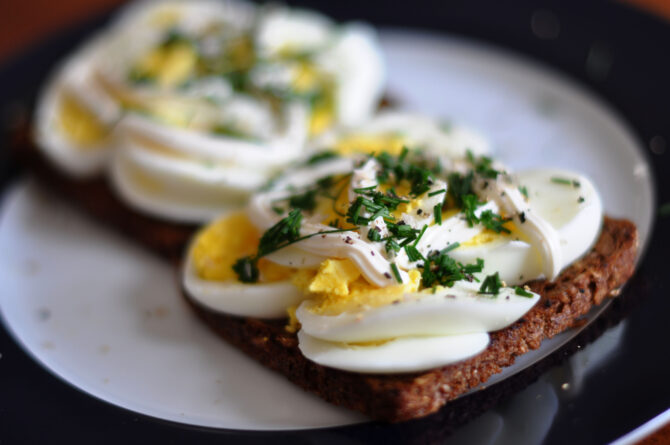 The best dishes are often the simplest: a golden roasted chicken stuffed with fresh herbs, a salad of ripe summer tomatoes scattered with crisp shallots and drizzled with a mustard vinaigrette, briny oysters served only with a wedge of lemon – or a couple of hard-boiled eggs generously crowned with mayonnaise.

The latter, a culinary masterpiece known as ‘l’oeuf mayo’, is an often underestimated and once shunned classic of French cuisine. The humble bistro dish was probably first served in Parisian ‘bouillons’ (eateries offering cheap, plentiful meals) in the second half of the 19th century. Because of their austerity, eggs with mayonnaise were labelled a ‘plat canaille’ (simple fare) and rarely appeared on the menus of the better (read: pretentious) restaurants. You could order them at bistros and ‘routiers’, but by the late 1980s, the French had lost their appetite for oeufs mayo, partly due to high cholesterol scaremongering.

Culinary critic Claude Lebey, however, wasn’t having it. In 1987, he founded the ASOM (Association de sauvegarde l’oeuf mayo) with his friend, journalist Jacques Pessis. The purpose of the ASOM? To maintain and glorify this delicious French food tradition. According to the ASOM, the perfect oeufs mayo should meet the following criteria: they must look appetising; only large, quality eggs (three halves precisely) should be used, and their yolks must be creamy; the mayonnaise must be homemade and generous; the eggs can be served with cooked or raw seasonal vegetables, but they must be absolutely fresh; the eggs must neither be too hot nor too cold.

Until 2013, the ASOM held an annual competition to determine which Parisian restaurant made the dish best, but when Lebey retired that year, it also meant the end of the ASOM. Luckily, Vincent Brenot decided to continue his  grandfather’s work in 2018, and since then, oeufs mayo have made a comeback. In 2018, the coveted prize was awarded again by a jury of culinary connoisseurs (the winner was Cédric Duthilleul of chic bistro Le Griffonnier).

Last November, the lucky fellow to win the Championnat du monde de l’oeuf mayo was Sébastien Devos of La Rôtisserie d’Argent. His eggs are served on a slice of potato boulangère and topped with pickled mustard seeds. They’re the most affordable entrée on the menu at €9.

In 2019, I drove to Paris just to try that year’s winning eggs, made by Clément Chicard of Bouillon Pigalle. Their yolks were perfectly creamy, or ‘crémeuse’, as the French would say, and the mayonnaise was velvety with just the right amount of ‘tang’. The price is still a very modest €1.90. If you want to make the eggs yourself, the recipe is in the recently released L’oeuf mayo: Recettes extraordinaires par 49 grands chefs. As for me, I feel another trip to Paris coming on.

We’ve created the ultimate online destination for home cooks and gastronomy enthusiasts who love French food and drink. Taste of France is a celebration of French cuisine in all its forms. Savour local produce in characterful markets, tour France in search of new foodie experiences and enjoy classic French food, wine and recipes.

Previous Article The Ultimate Guide to Christmas in France
Next Article See inside: A £47,000 renovated French cottage with a barn for sale