What exactly is a French bistro?

First published: 23 May 2018 by Sophie Gardner-Roberts 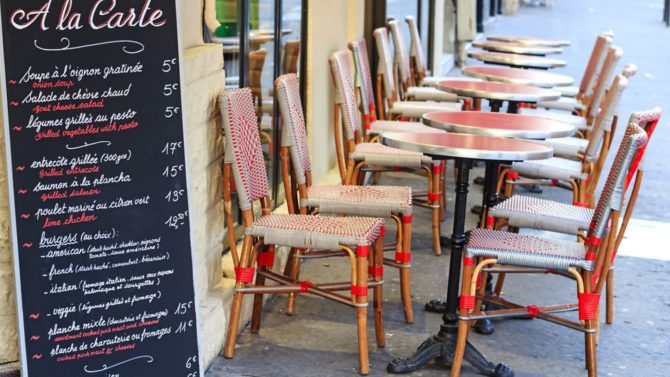 You’ve heard the term and probably have already eaten in a French bistro, but what makes a bistro in France so special?

Sometimes spelt bistrot, this establishment resembles more a café than a restaurant. Bistros are usually small and modest with a handful of tables and chairs at the bar counter. They serve mostly drinks but also small, traditional dishes to eat.

It appears bistros were first opened by workers from the Auvergne region who fled poverty and unemployment in their home to work in factories in Paris. They opened modest shops which served drinks and affordable food, in stark contrast with the grander cafés in the French capital in the mid-19th century. These establishments attracted mostly working class clients; Émile Zola painted a rather terrible picture of them in his novels but they were, in truth, an important place for workers to socialise and relax.

Traditional bistros have a large zinc bar (le zinc soon became slang for a bar); they’ll have an extensive coffee and drinks menu and a relatively succinct food offering.

The menu changes daily, often according to what was found and bought at the market so it’ll be scribbled on a blackboard – the waiter is likely to show you l’ardoise before ordering. You’ll find traditional French dishes such as boeuf bourguignon, oeufs-mayo, blanquette de veau, followed by desserts such as tarte Tatin or an île flottante. Generally, the wines are affordable and not necessarily grands crus, rather personal favourites of the chef or small but no less interesting appellations.

Bistros are generally family businesses passed down generations, with the owner – known affectionately as le patron or la patronne – taking an active part in the everyday running of things either in the kitchen or behind the bar. Bistros are laid-back, cosy places where people come to relax after a long day and enjoy a good, hearty meal with friends.

The word ‘bistro’ led to the recent trend of bistronomie where chefs have freed themselves from the constraints of gastronomic restaurants and have decided to open more modest bistro restaurants serving good quality but simpler food.