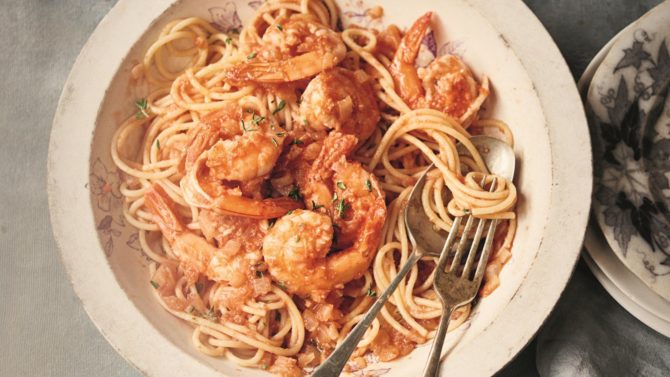 Try your hand at this delicious seafood pasta dish which is given a burst of flavour with plenty of tomato, prawns and garlic

“France has been, in a way, my second country, and I never really wrote about it,” Claudia Roden admitted in an interview with The Guardian last year. Yet the esteemed cookbook writer has owned a Parisian studio for over thirty years and is widely credited with changing our attitudes towards the food of the Mediterranean and the Levant.

Her latest offering, Med, is a culinary ode to the coastal countries that have so inspired her over the decades – and there’s plenty of French influences to be seen. This delightful seafood spaghetti dish melds tomato, garlic and prawn flavours to create a fuss-free supper that will transport you to the sun-soaked seashore with every mouthful.

“There are many versions of pasta with seafood around the Mediterranean sea,” says Roden in Med. “When, for a Sunday paper, I asked Italian celebrities what their favourite pasta dish was, most said ‘ai frutti di mare’ and that it was their own recipe. I tried them and loved them all. But for my favourite, I cook the pasta a Catalan way in boiling fish stock (it adds a surprise layer of flavour) and serve with a sauce from the Côte d’Azur. My grandson Cesar, a pasta man, adds a lot of chilli. I sometimes add other seafood, such as squid or shellfish.”

Previous Article Dreaming of setting up a campsite in France? This is how to do it!
Next Article Book Competition: Win a copy of Fracture by David Longridge