8 of the best vegetarian restaurants in Paris 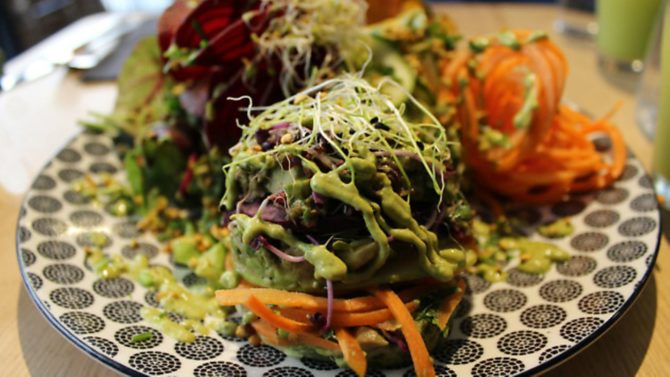 Recommended by style bible Vogue no less, 5 Lorette has created quite a stir since opening at the start of this year. With its rows of exposed light-bulbs, pale wooden tables and feature ‘sea-blue’ wall, this cute little canteen has proved a hit with hip Parisians, but also with discerning foodies too. Open for lunch from Tuesday to Saturday and dinner from Thursday to Saturday, it offers a delectable range of top-notch fare – think organic, gluten-free super-foods rustled up into a mouth-watering mix of mostly vegan plates of goodness. Alongside, the range of juices is so good that you could probably live on those alone. Everything is beautifully presented on the 5 Lorette’s signature china with its pretty geometric patterns; style and substance.

The original and the best, Le Grenier de Notre-Dame is a Paris institution. The city’s first vegetarian and macrobiotic restaurant, it opened back in 1978 – and has had the same chef, Abib, and worked with the same local growers in Northern France, ever since. Recognisable by the distinctive front windows, where verdant plants and exotic specimens dangle down from the first floor, inside it’s always packed – so book early. Offering certainly the most extensive menu of any vegetarian restaurant I’ve visited, this really is veggie heaven. L’Assiette Royale (17.95€) showcases ten different components, ranging from brown rice to seasonal vegetables to egg, avocado and soya. A riot of flavours, it’s a feast fit for a (vegetarian) king. With many of their ingredients organic and/or sourced from equitable suppliers, and plenty of vegan-friendly options too.

The humble burger has enjoyed a renaissance of late and, when it comes to the veggie variety, Hank (standing for ‘Have A Nice Karma’) is among the best in Paris. With a fresh sesame bun, melted vegan cheese, tasty tomatoes, red onions, pickles and salad as standard, the mouth-watering organic vegan steaks also come with a choice of four sauces – mustard with alfalfa; smoked barbecue with peppers; coriander with tortilla chips; or tomato and basil with black olives. With the burgers costing a bargain €8 and the ‘Petit menu’, with Belgian fries and a drink added, at just €12, it’s not going to break the bank, either. It looks as if the brand could be a burgeoning business empire – it opened a vegan pizza place this summer in nearby Rue des Gravilliers.

Located a little off the beaten tourist-track, a 20-minute walk from the Eiffel Tower, Brasserie Lola provides an authentic local experience. It looks like a traditional brasserie, complete with a table-decked terrace, and even the food resembles classic French fare – but don’t be fooled. Here, everything is entirely vegan – and very good it is too. Staples include the club sandwich, tartine crostini and mushroom risotto. The staff are friendly, the vibe is relaxed, and it really does feel like a taste of proper France. The good news for Lola fans is that the owners have opened a smaller sister restaurant, Brasserie 2ème Art, in Rue Montmartre.

Which Michelin-starred restaurants in Paris are worth splashing out on?

Probably one of the best-known vegan restaurants in Paris, the Gentle Gourmet Café opened in 2012 following the success of the owners’ vegan B&B. Open from Wednesday to Sunday for lunch and dinner, this chic restaurant is renowned for its seasonal gourmet dishes, offering vegan cuisine that is the equal of, if not better than, classic meaty fare. It seems their efforts are paying off, with the city mayor’s office describing it as one of the “best addresses of the capital”. Look out, too, for the more informal Tuesday night music evenings. With a second restaurant promised imminently, things look set to get even more interesting.

Having been launched just over a year ago, Le Potager de Charlotte is still something of a hidden gem. However, as it opens just three evenings a week at the moment (Thursday to Saturday), you’ll still have to book early to get a table. Although they are open at lunchtime as well (Thursday to Sunday), the atmosphere is extra-special in the evening. With an intimate, fine-dining feel, the candlelit tables are beautifully presented, the service is excellent and the food is first-class: 100 per cent vegan, mostly organic fare, along with a range of wholesome smoothies and juices.

Hidden away down a fairly nondescript side-street, this unassuming little place offers some of the best South-East Asian cuisine in Paris. The problem is, everyone else knows that too, so be prepared to queue, as they don’t take bookings. The creative, almost entirely vegan menu is full of tantalising dishes – not least the ‘mock meat’ options, cooked from textured soya protein, so don’t be perturbed by the references to ‘beef, ‘chicken’ and ‘pork’. The wait is long, the setting is functional and it’s not one for wine-lovers (they serve only soft drinks or Chinese and Thai beers), but Tien Hiang is still rightly regarded as one of the best vegetarian restaurants in Paris.

Found just a short walk from the buzzy Canal Saint-Martin area, Soya is housed in a former workshop and honours the original utilitarian design of the building with its lofty atelier-style windows, plain stone walls and even an old hoist still in evidence (be warned, there is no formal signage, so look for the street numbers). While the decor is plain, the ‘fusion food’, as it is billed, is anything but, offering 100 per cent organic vegetarian and vegan options. Options include curry masala and a vegetable couscous dish. Soya is a little pricier than average, but worth every penny for the fantastic fare, authentic setting and friendly service.

Previous Article Guide to pensions in France
Next Article Win! A copy of the cookbook, La Mère Brazier