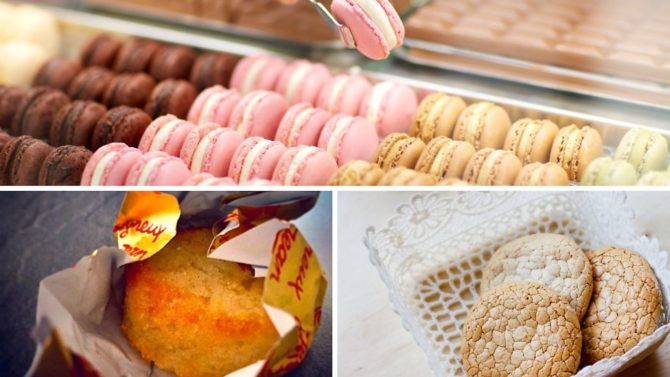 It’s the 16th National Macaron Day on 20 March but the history of the French macaron is thought to go back to the 16th century, with several regional variations created along the way

The macaron is thought to have been introduced to France from Italy by Queen Catherine de Medici during the early 16th century. You’re likely to be familiar with the modern pastel-coloured confections – indeed, they were the most Instagrammed European food in 2019 – but did you know several regional variations came before them?

Originally created by Ursuline nuns in 1620, these macarons were baked in round, rough disks and pressed onto paper sheets. The recipe has been passed down through the generations and is now in the hands of Nadia Fermigier, said to be the only person who has a copy of the original 1620 recipe. The macarons are sold at her Fabrique des Macarons on Rue Gaudet in Saint-Émilion and can be enjoyed at Au Parvis des Thés, a salon de thé just 200m away run by her daughter Caroline.

The most famous Basque Country version of the macaron has been made by Maison Adam in Saint-Jean-de-Luz for more than 350 years. Created for the wedding of King Louis XIV to Maria Theresa of Spain in Saint-Jean-de-Luz in 1660, the macaron, which is also called mouchous in the local dialect, is still made to the same top-secret recipe that includes Spanish almonds, egg white and sugar.

In 1792 Carmelite nuns Marguerite Gaillot and Marie Morlot began to bake and sell macarons in the eastern city of Nancy as a means of supporting themselves during the French Revolution. Their reputation and that of the macaron grew and they became known as the Soeurs Macarons. La Maison des Soeurs Macarons on Rue Gambetta continues to make the macarons to the same centuries-old recipe, a closely guarded secret that only the shop’s current owner, Nicolas Génot, knows and is trusted to make.

Pierre Desfontaines, cousin of La Maison Ladurée founder Ernest Louis Ladurée, had the revolutionary idea of taking macaron shells and sandwiching them together with jam, buttercream and ganache. Established in Paris in 1862 the brand has become synonymous with the ubiquitous pastel-coloured confections that are now sold in a wide range of appealing flavours. Pierre Hermé is another name that is inextricably linked with the iconic pâtisserie and the acclaimed pastry chef established a National Macaron Day (Le Jour du Macaron) in 2005, which takes place on 20 March.

The macaron d’Amiens is a golden-crusted biscuit made with ground almonds and apricot jam. Amiens chocolatier Jean Trogneux on Place Notre Dame is best known for its macarons d’Amiens, producing over two million a year to a recipe created by Jean Trogneux in 1898. It’s also as famous for its macarons as it is for its Macrons – family member Brigitte Trogneux is married to President Emmanuel Macron and her nephew is the fifth generation to take the business reins.

Make your own chocolate macarons with this recipe