Celebrating Christmas and New Year in style in France 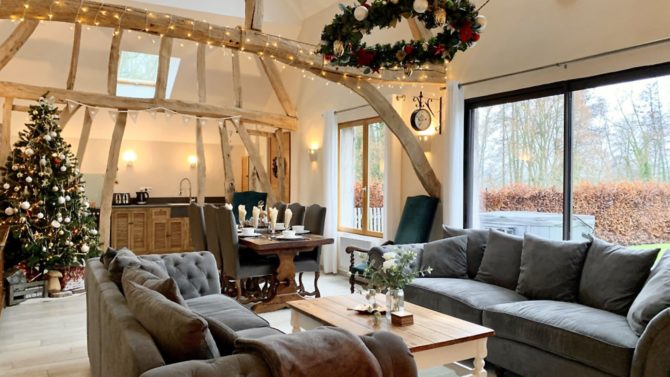 Moving to France is often a long-held dream of couples who have visited the country many times on holiday over the years. But Louise Russell, from Tunbridge Wells in Kent, had only visited France a handful of times when she made the life-changing decision to move there permanently with her partner, Ben Hales.

The couple moved to northern France in June last year, with Ben still commuting back to Croydon for work while Louise devoted herself to creating their dream life abroad and getting a new business off the ground.

Her parents, who previously lived on a fruit farm in Brenchley, have also moved over to live with them, so the whole family has embraced a new start. “We’ve always wanted to do it and if we’d stayed at home, been married with kids, it would have been so much more difficult to make the move out here,” says Louise, 29.

Ben, 31, who is a sales manager for Land Rover, is also a keen fisherman and would travel over to France several times a year to go fishing.

When Ben was 30 he decided to put the move into motion and it didn’t take long to find the perfect house in Neuville-Coppegueule in the Bresle Valley on the border with Normandy.

“I came out a few weeks later with him and I just ended up bursting into tears, I was so overwhelmed, just with the beauty of it – it’s so lovely,” Louise says.

“It’s the money as well. You cannot compare what this cost to what you’d get for the same money in England, it’s just totally different.

“We’re going to try and have kids in the next couple of years and there’s nowhere you’d rather be than here.”

The couple’s idyllic new home came with a recently converted barn which they started renting out as a holiday home in September last year, listing it on websites such as booking.com and Airbnb.

The four-bedroom property, which benefits from a babbling river running through the garden and stunning views of the surrounding countryside, had already been renovated by the previous owner for when his friends and family came to stay.

Louise explains: “He had a house in Paris and used this place as a weekend retreat.

“But his wife was more of a city girl and didn’t like being so rural, so they ended up selling and going back to Paris.”

In contrast, the rural setting, within half-an-hour of the coast, was one of the big draws for Louise and Ben who could see the potential for attracting holidaymakers, as well as it being perfect for family life.

There is a boulangerie you can walk to and two villages are just a 10-minute drive away with all the amenities they need, including shops and restaurants.

Their visitors enjoy day trips to the fishing port of Dieppe and pretty villages, such as Lyons-la-Forêt, as well as the cities of Amiens and Rouen.

Coeur de la Vallée is an hour and 20 minutes from Calais and the journey on the Eurotunnel from the UK takes just half-an-hour, which has made it relatively straightforward for Ben to travel back and forth every fortnight.

While the barn conversion was in great condition and already had a contemporary kitchen and bathroom fitted, the couple had to fully furnish the space to get it ready for guests.

Louise had already given up her job in preparation for the move and started sourcing items for the gîte, as well as looking after their new puppy.

“Most of the furniture we brought over from England,” Louise says. “It took almost a year to move out here, so over the course of that year we were gathering furniture and second-hand pieces. Anything we could find which was French-style we collected over the year and brought out with us.”

Coeur de la Vallée has been tastefully decorated and prepared as a gîte by Louise and Ben with a stylish modern finish including bright walls, on-trend grey sofas and dining chairs and attentive finishing touches including fairy lights draped across the beams and pretty, fresh flowers.

“A lot of the French properties tend to be quite dated and we wanted it to feel fresh, clean and minimalistic,” Louise notes. “It is full of French character with a touch of English charm.

“The views from the garden are breathtaking, surrounded by fields, trees and lakes as far as the eye can see.”

Guests can relax on a wonderful outdoor terrace and take in the scenery while cooking on the barbecue. There is also a pick-you-own herb garden and a hot tub.

In total there are three properties on site, including the house where Louise lives with her parents and the gîte. In the long term, Louise’s parents hope to construct their own small eco house on the paddock too.

“We are constantly busy because it’s quite a big property, there’s a lot of land with it and there’s quite a few trees that have got over-sized, so we’ve been cutting those down and clearing fields,” Louise says.

“There’s quite a lot to do, I don’t think it’ll ever be completely done, it’s a working project. My dad is in his element though, we couldn’t have done it without him, he is so knowledgeable about trees and doing things outdoors.”

The area is a haven for wildlife; deer are regularly spotted in the grounds with buzzards soaring above. The family has also adopted some chickens and goats, with rescue donkeys joining them soon.

Living just down the road from the holiday rental has also made it particularly convenient to get everything ready in-between guests.

Louise relishes her role as host, welcoming families and couples as they arrive.

“Our guests have been lovely,” Louise says. “We’ve had visitors from England, France, Belgium, Australia, some absolutely wonderful people. They’ve just loved the place as well and all said they’d happily come back.

“It’s been really nice meeting all sorts of different people.”

In the future, Louise and Ben would love to provide hampers for guests when they arrive full of fresh fruit and vegetables from their newly created vegetable garden, as well as selling products they’ve made, including scented candles and hand soaps, to remind people of their holiday.

They also want to branch out into glamping next year, inspired by TV show Escape to the Château.

“That is my favourite programme in the world,” Louise says. “That is partly what inspired us to come out here.

“We’ve got a lot of ideas for next year including renovating our other barn into a second gîte and creating a glamping experience with a ‘stargazer’ tent down by the river. This should enable Ben to be able to live here full-time.

“He’s just absolutely desperate to come out here and wants to get out of the rat race. He spends about an hour-and-a-half travelling to work every day and I do feel for him, he’ll ring me during the day and I’ll say ‘I’m just out with the chickens’ and he’s stuck on the M25.”

During the cooler months, there is a wood-burning stove to keep the gîte cosy and warm throws to add an extra layer while cosying up to watch a film. Coeur de la Vallée had guests to stay for Christmas and New Year last year and is booked out again this year and every weekend in December, although it does have availability for mid-week getaways over the holidays.

It is naturally quieter at the start of the year with the family experiencing their first festive season and winter in France last year.

“I miss Ben and my friends but I go back once every couple of months to see everyone, so we’ve adjusted quite well,” Louise says.

“We couldn’t have done it without my parents, especially not having Ben here, they’ve been great company and support.

“All of our family and friends have been great and believed in us throughout.”

As they get used to the change of pace and settle into their new surroundings in France, the whole family is thrilled with their exciting new life and what the future holds.

“We had a lot of bookings throughout the summer and it’s just trying to get ourselves known through social media and get the word out there, because everyone that comes says it’s an amazing place,” says Louise. “They’re overwhelmed by how beautiful it is.”

Despite time spent apart at the moment and a long to-do list, Louise and Ben are delighted they made the move.

“The opportunity came along and we just took it, before we had too many ties at home. We sold the house and just went for it,” Louise adds.

“It was a really scary thing to do and hard work, but totally worth it.”